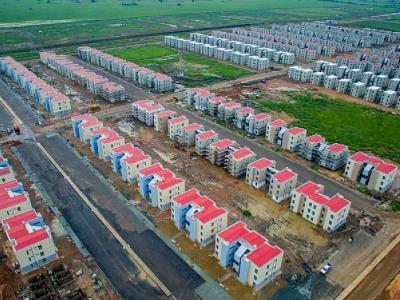 The Housing Minister has revealed that following an audit report submitted by the Ghana Institution of Surveyors on the Saglemi Housing project it has been revealed that over $114 million has been embezzled by the NDC administration.

According to Samuel Atta-Akyea, the Criminal Investigations Department (CID) of the police is interrogating his predecessor and other Ministers in the Mahama era for allegedly ‘inflating’ 1,500 units of Saglemi Affordable Housing Projects.

This, he says, is a clear indication that the NDC cannot be entrusted with Ghana’s housing sector should they be voted back into power.

“The Ghana Institute of Surveyors have come out with a report showing that what is on the ground, measured against the money received will bring out a very very huge figure of about $114 million”.

Reading from a report signed by the President of the Ghana Institute of Surveyors, Dr. John Amaglo, he said: “It is stated in black and white that the amount paid to the contractor is $179,904,752.5. It is stated clearly that the total works on the ground is $64 million, the difference is what gives you the $114 million I’m talking about.”

The 2,172 acres on which the Saglemi housing project is situated was procured in 2002 during the era of President John Agyekum Kufuor.

On August 15, 2012, the late President John Evans Atta Mills gave executive approval to the Ministry of Water Resources, Works and Housing to implement the project.

The project involved the construction of 5,000 housing units for sale to members of the public through mortgage provided by Ghana Home Loans.

The project was implemented by Constrastora OAS Ghana Limited through a buyer’s credit of up to $200 million.

However in June 2020, Speaker of Parliament, Mike Oquaye directed a parliamentary probe into the alleged misappropriation of about $159 million meant for the Saglemi Housing project.

Speaking on the matter on JoyNews’ PM Express, Atta Akyea said the embezzlement charge against the NDC government is enough indication that the NDC couldn’t be trusted with the nation’s housing challenges.

“Saglemi questions the bona fide of NDC to do any serious housing project,” he added.