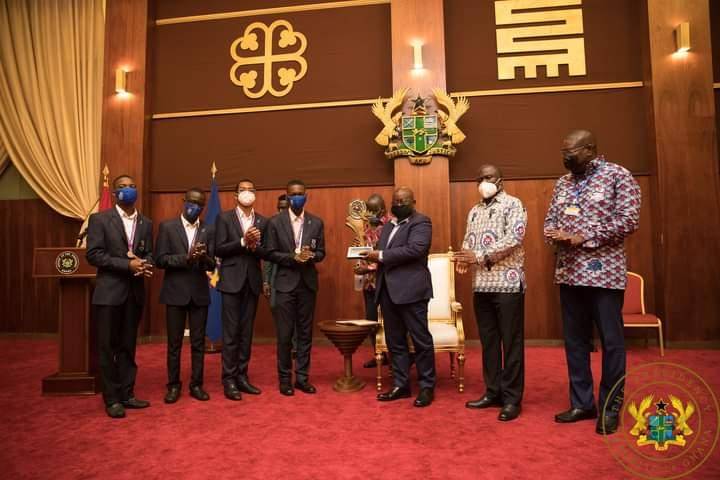 President Akufo-Addo says he shares in the victory of the Presbyterian Boys Senior High School (Presec) at the 2020 National Science & Maths Quiz (NSMQ) competition particularly because the four contestants who represented the school, Isaac Kofi Gyenfi, Benjamin Quansah Nketia and Daniel Kekeli Gagbeto and their reserve partner, Faith Cyril, are part of the first batch of direct beneficiaries of Government’s Free Senior High School programne which was rolled out in 2017.

Addressing the NSMQ 2020 winners at the Jubilee House, today the 14th of October 2020 when they  paid a courtesy call on him to present their trophy to him, President Akufo-Addo said Presec having gone a whole decade without winning the NSMQ trophy, “it is entirely fitting that the Akufo-Addo graduates, that is, the first batch of beneficiaries of the free SHS policy were the ones who have ended Presec’s trophy drought”.

“I also share in your success. I indicated at Presec’s 80th anniversary celebration that the school has become for me, and for many Ghanaians, one of the best Senior High Schools, if not the best in our country. Indeed, winning your sixth (6th) title means that you are now the undisputed kings of the National Science & Maths Quiz NSMQ competition. As an honorary Odade3, I am proud of this achievement” President Akufo-Addo said.

The National Science & Maths Quiz, Ghana’s most celebrated and anticipated annual event came to a climax on 8th October, 2020 at Cedi Conference Centre, University of Ghana, Legon. This year’s Grand Finale featured a truly intense contest between Adisadel College, Presbyterian Boys’ Secondary School and Opoku Ware School. In 2019, the three schools locked horns at the Semifinal Stage with Presbyterian Boys Sec. School kicking out their contenders. With 36 points at the end of the contest, Presbyterian Boys’ Sec. School won their 6th NSMQ trophy maintaining their rank as the highest winning team in NSMQ history. They also won the AirtelTigo Highest Scorer of the Day award, worth GH₵10,000.00 at the Final Stage of the competition. Presbyterian Boys’ Sec School’s Daniel Kekeli Gakpetor won the Academic City Presidential Scholarship, worth $40,000.

President Akufo-Addo congratulated the quiz mistress for the competition, Dr. Elsie Effah Kaufmann, organizers of the NSMQ, Prime Time Company Limited and the sponsors of the competition for the excellent initiative. He urged the students winners not to relent in their quest for higher knowledge in the years of learning ahead of them.

“Congratulations are in order ones again to Presbyterian Senior High School on their victory and I wish the contestants in particular, the very best of luck and God’s blessings in all the it future endeavors. I urge them to remember at all times, the words of the school’s motto, In Lumine Tuo Videbimus Lumen, “In their light, we shall see light”. “The best days of Presec and indeed, our nation lie ahead of us” President Akufo-Addo said.

The NSMQ is the longest-running independent production on television in Ghana. The programme is very popular with not only its main target group – Senior High School students – but also with parents and, especially, with former students (old boys and girls), who take great pride in the performance of their schools on this programme.

The objective of the National Science & Maths Quiz has been to promote the study of the sciences and mathematics, help students develop quick thinking and a probing and scientific mind about the things around them, while fostering healthy academic rivalry among senior high schools. Without a doubt, these aims have been achieved. The quiz, popularly referred to as “brilla” by many who have gone through the secondary school system is by far one of the few academic events that bring all of Ghana’s secondary schools together. The schools and