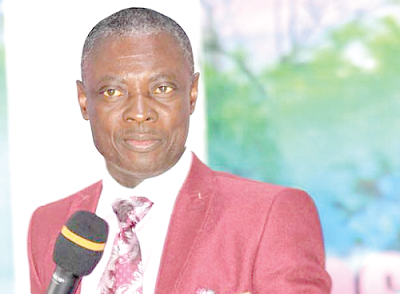 The Electoral Commission (EC) has confirmed that a new political group has submitted its application for consideration as a fully fledged political party.

The new party, Ghana Union Movement, has for its slogan “Arise for Development”.

The movement’s symbol has a logo which portrays a fist of a man against two hands with the name and motto of the movement boldly written around it. It has red, yellow and white as its colours.
Its leader is Reverend Christian Kwabena Andrews, popularly known as Osofo Kyiri Abosom, the Founder and General Overseer of the Life Assembly Worship Centre in Accra.

The Deputy Chairperson of the EC in charge of Operations, Mr Samuel Tettey, when contacted, told the Daily Graphic that the Ghana Union Movement had submitted an application for registration as a political party.

He said details of the party had been forwarded to the EC’s Director of Election Services for onward transfer to the regions where vetting would be done by the regional offices of the Commission to ensure that the group had satisfied all the requirements.

Having satisfied itself that the group has fulfilled all the requirements, he said, the Commission would publish a gazette following which the Chairperson of the EC would issue the group with a provisional certificate.

Speaking to the Daily Graphic, Reverend Andrews, claimed that the movement had already established offices in all the 16 regions and some districts in the country.

He added that the movement has submitted its documentation to the Electoral Commission (EC) for certification in respect of its political agenda.

Rev. Andrews said the movement was serious about its decision to contest the 2020 presidential race and had made available to the EC, all the relevant documentation to guarantee its certification.

He said its engagement with the EC was far advanced and that it is expected to complete the certification processes shortly.

“We have already submitted all our documents, including our constitution and logo to the commission.

We have had a fruitful engagement with the EC so far and we expect to complete all the processes and obtain our certification,“ he stated.

No intention to lead

Rev. Andrews stated that although he founded the GUM, he would not lead the movement into the presidential race.

He said when the movement obtained its certification, it would proceed to elect its executives, including its presidential candidate, all of which would be done before the end of the year.

“We already have interim executives. Immediately after our certification, we are going to officially announce our existence, unveil our executives, including our presidential candidate and launch our campaign,” he stated.

Rev. Andrews said the ideology of the movement was to revisit the developmental agenda of Ghana’s first President, Dr Kwame Nkrumah, which focused on massive industrialisation across the country to propel national development.

He said the movement had intercepted numerous documents and video materials detailing the development agenda of Dr Nkrumah and the extent to which the numerous projects he undertook during his seven-year reign had been left to decay.

He said the movement’s agenda was to rally the citizenry, particularly the teeming unemployed youth, to join forces with the movement and revive all the development policies of Dr Nkrumah as it was the only way the country could overcome its development woes.

He said unlike political parties, which he described as loyal to its members and not the state, the main agenda of the movement was to implement policies that would directly affect and transform lives.

“We are not Nkrumaists because we are not following Nkrumah as a person but only share in his development agenda.

We want to change the narrative where political parties take interest in populist policies and not those that will serve the interest of the state,” he added.

Rev. Andrews said the movement had so far attracted massive membership, hence his confidence that the GUM would pull a surprise at the 2020 elections.

According to him, not less than 15,000 people had so far registered to be members, adding that the figure was expected to shoot up when the movement was officially launched.