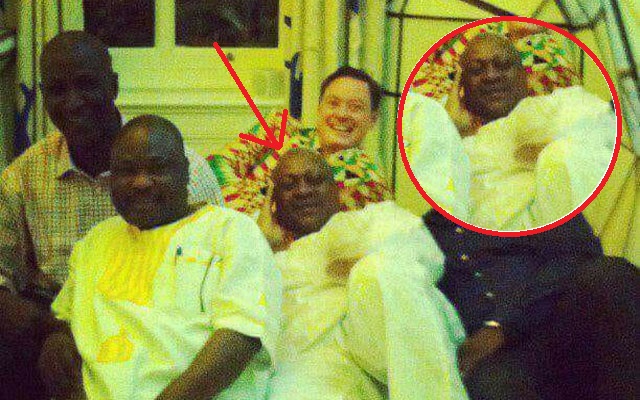 A Member of the communications team of the ruling New Patriotic Party, Banasko Ansah Francis has described how former president John Dramani Mahama and world renowned Gay rights activist Andrew Solomon spent a whole night together in bed, giggling and ‘touching’ each other.

According to him, pictures that are currently in the public domain showing the duo including some other people lying on a bed when the former president visited Mr. Solomon were taken the morning after the two men had a good time together.

‘’They shared the same bed and spent the night together. They took the picture the morning after they spent the night together. Did they do something? I was not there and I can’t tell, but that was substantial, because the two were on the bed and John Mahama raised his leg into the air and Solomon also wriggled himself, turning all over. Solomon bought John Mahama’s book and John Mahama went to thank him in his bed. Doesn’t Andrew Solomon have a hall or living room? Why must it be in his bedroom?’’ he argued.

Mr. Ansah Francis who is a tutor at the Presbyterian Boys Senior High School (PRESEC) in Accra was contributing to a discussion on the current crisis that has hit gold trading firm Menzgold and the subsequent politicization of the matter by the opposition National Democratic Congress (NDC) on Accra based Oman Fm’s flagship political talkshow boiling point.

He is appalled that the NDC would condescend to the level of politicizing the whole Menzgold saga by accusing government of being complicit just merely because of a picture of the Chief Executive Officer  of the company and President Nana Addo Dankwa Akufo-Addo.

The NDC argues that for accepting to take the picture with Nana Appiah Mensah, the president endorsed the now distressed company and that government must accept culpability and pay the customers of the company.

But Mr. Ansah Francis believes the NDC’s plot is to make political capital out of the unfortunate Menzgold situation, explaining that per the logic of the NDC, it means that the NPP and Ghanaians can also easily conclude that by sharing a bed with Mr. Solomon, former president Mahama is a gay.