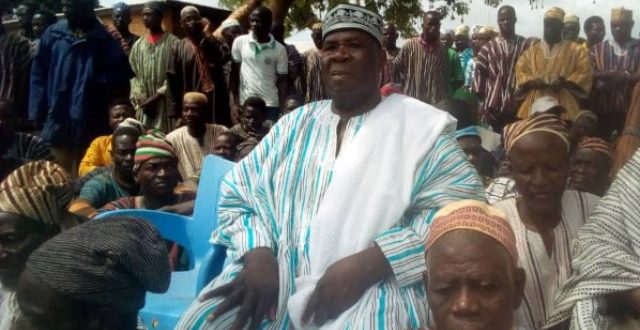 The former Chairman of the governing New Patriotic Party (NPP) in the Northern Region has been enskinned as the Paramount Chief of the Namong traditional area in the North East Region.

Before his appointment and investiture, Mr Naabu was a national council member of the NPP.

He lost his re-election bid as regional chairman of the NPP in 2018.

Mr Naabu grew up in Nalerigu at the Nayiri’s palace around the 1960s.

He later became a Pastor of the Baptist Church in Nalerigu.

He was appointed an assemblyman for the then-Mamprugu District Assembly.

Mr Naabu became a contractor in 1976.

He was elected as the Regional Chairman of the Ghana Contractors Association in the then-Upper Region.

In 1983, Mr Naabu was arrested by Mr Rawlings’s AFRC government and detained for seven months.

After his release, he became the Chairman of Real Tamale United football club and worked with the late Vice-President Alhaji Aliu Mahama.

In 1987, he became the national chairman of the National Contractors Association in the Northern, Upper East and Upper West regions.

He later joined mainstream politics and battled for the chair of the NPP in the Northern Region with the late Alhaji Salifu C.O.P for two consecutive times during the eras of Prof Adu Boahen and former President John Agyekum Kufuor.

In 2010, he lost his bid for the Northern regional chair slot of the NPP to Mr Haruna Tia Sulemana but nudged him off in 2014.

As regional chairman, he shored up the party’s parliamentary seats from 10 to 13 in the 2016 general elections. He also increased the votes for the then-presidential candidate of the NPP, Nana Akufo-Addo.

He lost his re-election bid to Mr Mohammed Samba Baantima in 2018 and was appointed to the National Council of the NPP the same year.