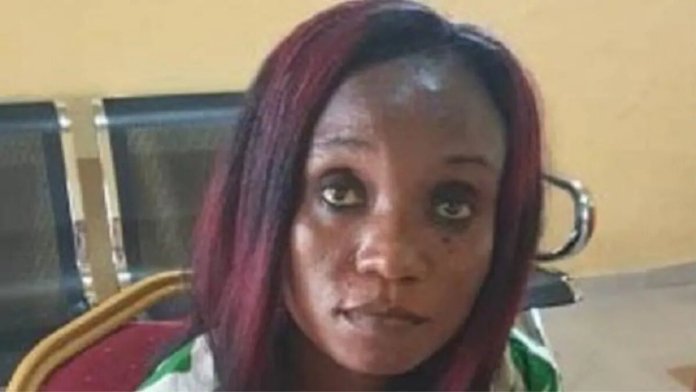 Chizoba Ogbonna, a 36-year-old mother of three, has been arrested by operatives of the IGP’s Special Intelligence Response Team (IRT) in Abiriba-Ohafia, Abia state, for allegedly faking her own kidnap so as to extort money from her family.

Ogbonna and her boyfriend, Joseph Ezema, allegedly staged the abduction and demanded 2 million naira (GHC 30,000) from her family.

Daily Trust reports that the police traced her to Abiriba in Abia state, and she was caught hiding in an abandoned house alongside Ezema, and one of his friends Uche Anthony.

According to a police report, Ogbonna sent a WhatsApp message from her phone to her elder brother, pretending to be the kidnapper and demanding for ransom. She also sent a photograph of her lying unconscious and gagged to the brother.

However, when her phone was tracked to check her last known location, she was seen walking alone to the bank to pick up the money. The mother of three, however, denied that she plotted her own abduction and insisted that she had no idea how she got to her abducted’s den. She said: “I’m a primary school teacher. I left my husband three years ago because I discovered the marriage won’t work. I met Joseph on Facebook in 2018. He told me he was into fashion & designing. We later became lovers. At a point, we agreed to travel abroad. He told me that he once paid N300,000 to get a US visa which did not work. On March 13, I was on my way to see someone when a vehicle stopped in front of me, I saw six persons inside the vehicle. I don’t know what happened and then I lost consciousness”.

I later found myself in the home of my boyfriend in Agboju, Abia state. He took my phone and called my sister. He started demanding for ransom. My involvement is that I begged my sister to pay the money or they would kill me.

I later sent her my account details and she paid N500,000 into it. Two days after the money was paid into my account, the police came after me; I was arrested alongside my boyfriend.” Ogbonna’s statement was however countered by her alleged boyfriend, Ezema, who claimed that the abduction was planned by her.

Ezema said: “When I told her that I was planning to travel abroad, she said she would stage her own abduction in order to raise money from her family.”