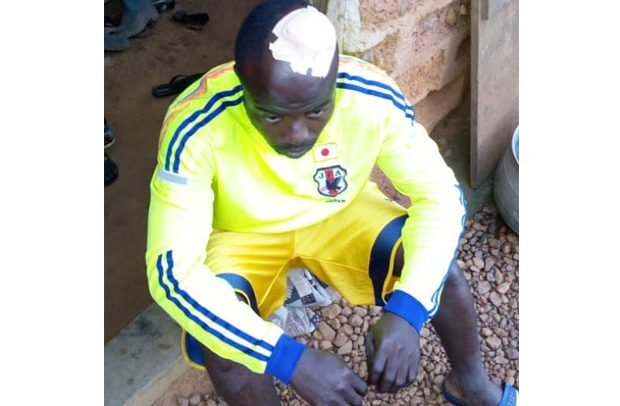 Scores of the opposition National Democratic Congress (NDC) members who voted in the just-ended parliamentary primary at Ofoase-Ayirebi Constituency in the Eastern Region ended up sustaining injuries following a clash between the supporters of two aspirants.

The Gyiwani D/A Primary/Junior High School located in between Ofoase and Ayirebi where the election was held was turned into a ‘war’ zone.

Some of the supporters brandished machetes, broken bottles, stones and there were even gunshots after a free-for-all fight broke out.

Around 6:30 pm after voting and counting of ballots had been ended, the Akyemansa District Electoral Commission Officer declared Rev. Poku, who managed to garner 428 votes, as the winner, beating his rival, Joshua Asumeng Badu, who scored 265 votes with two spoilt ballots out of the 695 total votes cast.

Being incensed by the defeat, supporters of Mr. Badu started causing confusion and commotion on the premises of the voting centre.

When matters began to worsen, the NDC Parliamentary Candidate-elect, Rev.  Poku, tried to move to his car but one of the supporters, who pretended to congratulate him, allegedly stabbed him in the head with a knife. Rev.  Poku, who used to be a military officer, tried to defend himself by slapping the assailant before leaving.

Many supporters sustained injuries as a result of the free-for-all fight. Besides, many plastic chairs were broken by irate NDC supporters.

The Regional Organiser, Hackman Kabore, and Evelyn Korang, the former Women Organizer, including some journalists, who were at the grounds, had to run for their lives.

The Akyemansa District Police Commander, Chief Sup. Daniel Oppong Asirifi, and his few men on the grounds had to fire gunshots to scare the supporters.

The supporters of Rev. Poku, who claimed they were defending themselves, blocked the Ofoase road which compelled the police to call for a reinforcement team from the Akyem Oda Police Division to control the situation around 7 pm. The police later had to escort Mr. Badu from the voting premises to the Gyiwani-Ofoase main road.

Those who were injured were sent to the Ofoase Health Centre for treatment, and the police have said they are investigating the case.