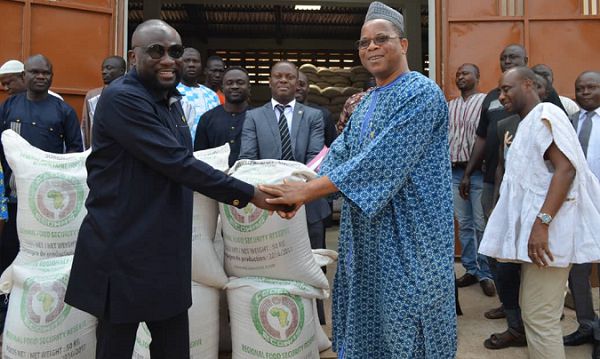 The National Food and Buffer Stock Company has signed an agreement with the Economic Community of West African States (ECOWAS) that will see Ghana use about 2,750 tons of cereals under the ECOWAS food security reserves.

The Chief Executive Officer of NAFCO, Alhaji Abdul-Wahab Hanan  clarified that the cereals are not a donation by ECOWAS as earlier reported but that the Government of Ghanan (GoG) will replenish the stock later this year.

He explained that the agreement will pave way for the disinfection and treatment of the warehouses and reduce the cost of preservation borne by ECOWAS.

Alhaji Hanan further reiterated the fact that NAFCO which supplies food for the Free SHS program was not facing any shortfall nor was there any food security threat in the country.

He explained that the agreement followed a request from ECOWAS for public sale of 2,750 tons of grains which NAFCO expressed interest in for use in public second cycle boarding schools in the country under the Free SHS program.

Alhaji Hanan was confident that through government’s Planting for Food and Jobs intervention, replacement of the cereals won’t pose any challenge to the country. He was expectant that NAFCO and the relevant ECOWAS bodies such as the Regional Agency for Food and Agriculture will continue to collaborate and deepen integration in the sub-region.