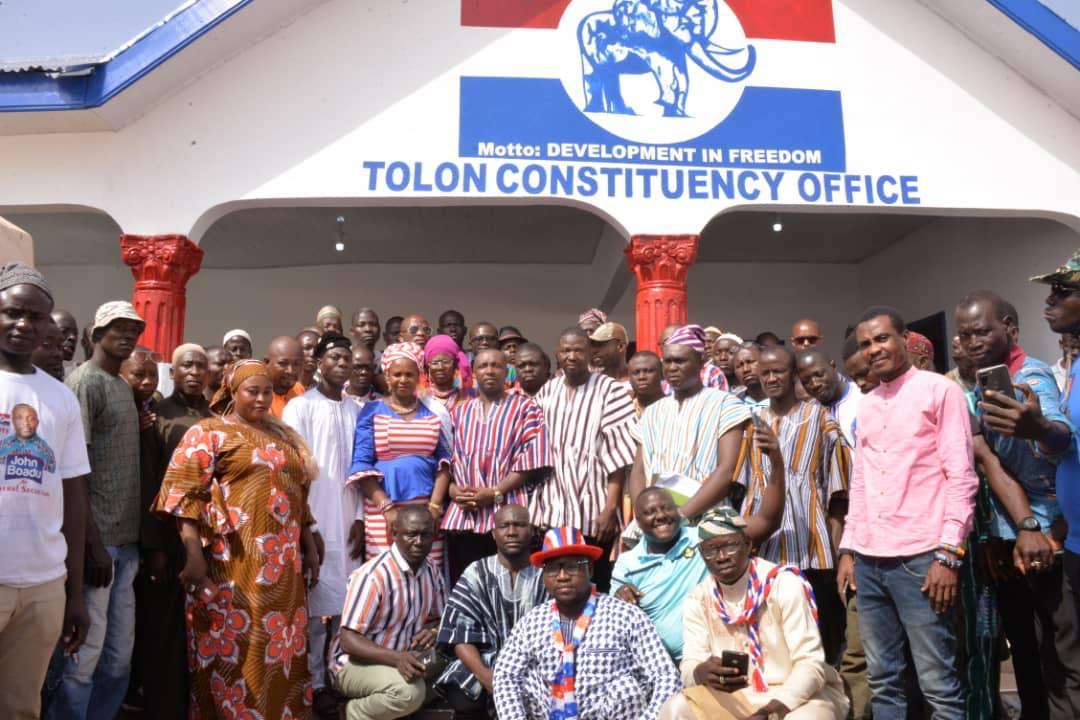 The General Secretary of the NPP, John Boadu, on Saturday, February 9, 2019, commissioned an ultramodern party office in one of the party’s traditional towns, Tolon, in the Northern Region. The office complex was constructed and donated to the party by a young businessman and party sympathizer, 33-year old, Abdul Malik Alhassan, for use as the Tolon constituency office. The party’s rank and file in the constituency greeted the occasion with a jamboree, essentially setting the entire Tolon township agog, as evidence of their immeasurable excitement.

John Boadu began the day with a visit to the Tolon Palace, where he paid a courtesy call on the Regent of Tolon, Naa Major Sulemana Abubakari (Rtd) and his elders, at which meeting, the revered traditional ruler, among other things, hailed President Akufo-Addo and the NPP government for bringing lasting peace in Dagbon, and for the many developmental projects being witnessed in Tolon and its environs.

After the visit to the palace, the NPP chief scribe, and his delegation, then proceeded to the site to officially commission the newly constructed office. In his remarks, John Boadu, conveyed the party’s esteemed gratitude, to, first of all, the sole financier of the project, for his bold and laudable initiative to advance the cause of the party in the constituency and beyond. He also thanked the Tolon traditional council particularly the Tolon Naa, Major Sulemana Abubakari, and indeed, all the people of Tolon, for their age-long loyalty to the electoral fortunes of the Danquah-Dombo-Busia tradition.

Mr. John Boadu, more importantly, used the occasion to challenge members of the party, particularly the youth, to draw the necessary inspiration from the unprecedented feat chalked by Abdul Malik Alhassan, and not hesitate to sacrifice the little they have for the good of the larger party. The NPP, he noted, was founded on the immense sacrifices and selflessness of individual members of the party, and continues to survive on their sacrifices and selflessness.

On his part, Abdul Malik Alhassan said, he was inspired by the exploits of the NPP General Secretary, whom he described as his political mentor; adding that, it was John Boadu’s unwavering commitment to strengthening party structures particularly at the local levels, that motivated him to put up the office for the Tolon Constituency which had no office. He pledged to continue to offer support to the constituency party to enhance the party’s fortunes.

It would be recalled that in the buildup to the 2018 Annual Delegates Conference of the party, to elect national officers, John Boadu’s campaign was largely anchored on a commitment to strengthening party structures, by ensuring among other things that, each constituency gets a befitting party office within his four year mandate.

Consequent to this, he committed resources, in cash and in kind, towards the construction or completion (as the case may be) of party offices in some of the constituencies he visited. The General Secretary would, in the coming weeks and months, as he indicated, be commissioning some of the newly constructed constituency party offices across the country.

John Boadu was accompanied by the northern regional executives of the party, led by the indefatigable regional chairman, Mohammed Adam Samba, as well as some Members of Parliament and MMDCEs in the region, and a host of party faithful in their hundreds.