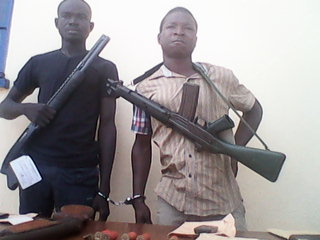 The Northern Regional Police has begun investigations into a case of gun snatching at a police checkpoint in Tamale.

According to the situation report, on Sunday, February 3, 2019, at about 7:30pm, Corporal Samuel Yeboah, Constable Maduku Amoh and Constable Brigitte Detornu were detailed for ‘Operation Calm Life’ snap check duty at Kapayili, a suburb of Tamale.

Constables Amoh and Detornu were issued with rifles, numbered 156214 and 5189 respectively, and 20 rounds of ammunition each. Corporal Samuel Yeboah was in charge of the operation.

At about 12:50am, a saloon car approached the checkpoint and three armed men got out and opened fire on them.

The culprits then snatched the two rifles from the officers and sped off after the exchange of fire, leaving the police officers with slight injuries.

The injuries, according to investigators, suggested that there was a struggle between the officers and their assailants before the guns were taken away from them.

Police investigators retrieved three empty shells which they suspect to be from SMGs from the scene.