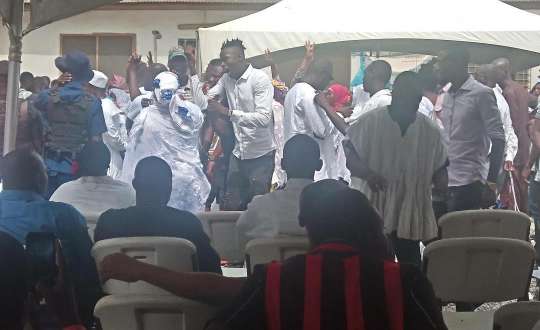 The Inauguration of Assembly Members for the Ayawaso East Municipal Assembly had to be cancelled on Thursday, January 23, 2020, following demands by some Assembly Members who claim they are affiliated to the opposition National Democratic Congress (NDC) that the number of government appointees should be reduced from 6 to 4.

The Assembly Members who were supported by some executives of the NDC in the Ayawaso East Constituency became rowdy with just about 10 minutes left for the ceremony planned for the inauguration to kick start.

Assembly Member for Nima 441 who was leading the park, Nuhu Khalid told BestNewsGH.com that the Municipal Chief Executive Hajia Salma Mohammed Kuta and her team at the Assembly were trying to cheat them. He said, “we won’t allow this stupid inauguration to go on. Do they think we have not been to school? If they don’t nominate 4 and bring us the 6 we won’t accept it”.

“We will make sure we resist it. Until they change the number we won’t allow the process to go on”, he fumed.

The agitations got to a crescendo when the Minister for Environment Science, Technology and Innovation, Professor Frimpong Boateng who represented the President arrived with other dignitaries including the MCE took their seats for the program to start.

The disgruntled Assembly Members together with their supporters, some of whom were clad in NDC apparel moved towards the dais and for over an hour chanted, ” we no go agree” amidst hooting at anyone who tried calming them down.

Not even the intervention of the chiefs who came to grace the occasion could calm the agitated assembly members and their supporter down. Their continual demands forced the coordinating director to announce the cancellation of the ceremony.