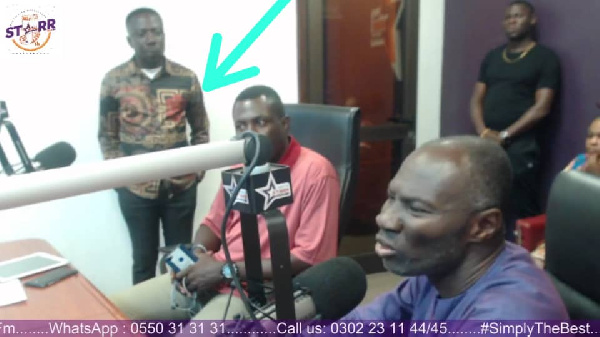 Mr. Beautiful is now one of the bodyguards of Prophet Emmanuel Badu Kobi, the controversial preacher, and leader of the Glorious Wave Chapel International.

The actor was captured as one of two security detail providing a guard to the prophet when the latter was been hosted at the studios of Starr FM by Bola Ray on StarrChat Wednesday evening.

Mr. Beautiful fell from Grace in Kumawood, when he openly declared his political stance for the then governing National Democratic Congress (NDC) and went ahead to campaign vigorously for its presidential candidate, John Dramani Mahama in 2012 and 2016, who was also president at the time.

He has since not landed any roles from the staunch New Patriotic Party-loyal producers and directors of Kumawood, crushing his once ‘Beautiful’ career.

“I have never regretted campaigning for John Mahama. It’s better for me to put my job on the line for Prez. Mahama. I have never lost anything after the campaign”, he told the Razz Newspaper after the elections.

Clement Bonney is however not alone; many other Kumawood actors who openly campaigned for Mr. Mahama are also struggling to land roles in Kumawood.