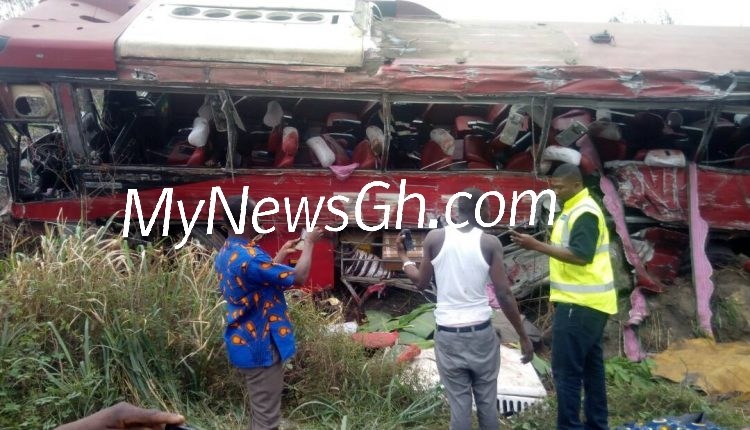 More than 70 passengers on board two buses that collided head-on in the early hours of Friday March 22, 2019 on the Tamale-Kintampo Highway have died instantly, MyNewsGh.com can confirm.

The accident occurred at Ampomakrom, a  village near Kintampo in the  Kintampo North Municipality of the Bono East Region, along the main Kintampo-Tamale Highway.

It is unclear what might have caused the collision but it is speculated that one of the drivers might have been dozing off and run into the lane of the other from the opposite direction.

All passengers, including those onboard one of the buses which was en route from Garu and bound for Kumasi have been burnt beyond recognition when the vehicle went up in flames soon after the crash

The other bus, branded VVIP and painted red, veered into a ditch after the collision, killing dozens oAs at the time of filing this story, the exact number of dead passengers had not been established, but MyNewsGh.com can report that only a handful survived the carnage.

There was wailing by onlookers and passersby as the police and fire service were salvaging what was left of the wreck and rescuing the survivors.

Kintampo Municipal Fire Commander (DO3) Mr. Ankomah Twene who confirmed the unfortunate incident to MyNewsGh.com, said it took his men close to 30 minutes to douse the fire on the other bus before they could cut and take out the dead bodies.