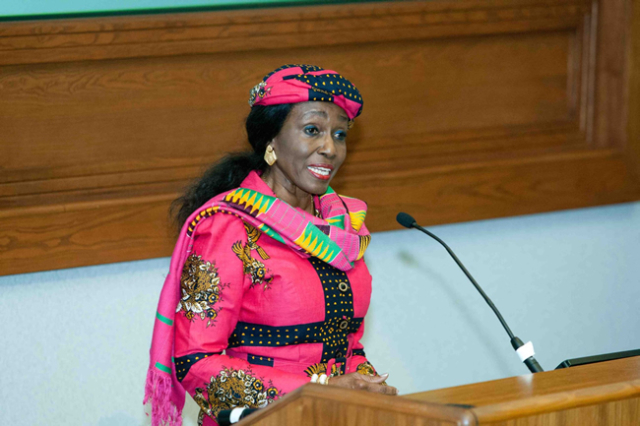 Former First Lady, Nana Konadu Agyeman-Rawlings has described the walk out staged by the Minority in Parliament during the swearing-in of Ayawaso West Wuogon Constituency Member of Parliament, Lydia Seyram Alhassan while displaying placards with the inscription ‘Bloody Widow’ as shameful and misuse of accepted parliamentary norms.

‘’Walkouts are an accepted practice in Parliamentary democracies, but staging a walk out because of the election of an innocent, grieving woman to Parliament is a shameful misuse of accepted parliamentary norms’’ she said.

According to the President of the 31st December Women’s Movement, the action by the Minority casts a doubt about their commitment to the progress of women saying ‘’ The events of Tuesday, 5th February, 2019, also casts doubt on the commitment of the Minority to the progress of women and towards ensuring the protection of women from domestic violence, Intimidation, discrimination and sexual harassment in the workplace; Inequality in the labour market; human trafficking; Child abuse and many other acts of injustice’’.

Mrs. Rawlings said the event of Tuesday February 5 2019 is a wicked attempt by the Minority to draw back the clock of progress made over the years towards women empowerment.

‘’As the President of an NGO for women, which has worked with women and young persons for over two decades, I see the events of Tuesday as a wicked attempt to undo the progress we have made so far in increasing women’s participation in politics and ultimately in national development’’ she opined.

She continued that ‘’I call on the leadership of the NDC to do what is honourable by apologising to Ghanaians generally and specifically, to the Hon. Seyram Lydia Alhassan and the good people of Ayawaso West Wuogon. For the legislative arm of government (Parliament House) to be taken seriously by Ghanaians, foremost, it should exhibit that it takes itself serious’’.