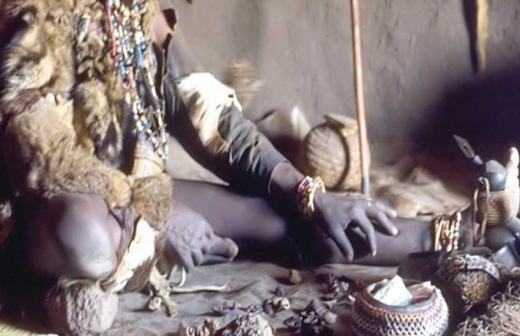 A 36 year old jobless man has attempted to use his wife for juju after his wife cheated on him when he has washed her panties for years. The man from Agona Nkwanta, Emmanuel Obeng who after years of dating his wife married her in December has been the one always washing the woman’s clothes including her panties for a while now due to his joblessness.

According to the report, Emmanuel Obeng claims his wife who is a successful businesswoman has been cheating on him and has not been taking care of him because of his unemployment situation. Because of that, he angrily took the wife’s picture and six panties of his wife and sent it to a juju man for rituals.

Emmanuel Obeng told the spiritual man to cause the wife’s breast and vagina to rot. He should also transfer the wife’s wealth to him. But the juju man realizing the wife is beautiful, he refused to do it.

Instead, he reported the man to the Agona Nkwanta police who in turn arrested Emmanuel Obeng. Emmanuel Obeng was made to spend one night at the police cells. He was only released upon the intervention by his pastors and others.

“I charged him 1,600 cedis and asked him to bring the wife’s picture and panties…He brought six panties and a picture of the wife but after seeing the picture of the lady and how beautiful she was, I decided to hand the man over to the police”.

But according to the police, they only arrested the man to put fear in him in order to stop him from further going on with his intentions but not necessarily because he broke any law.

Interestingly, Emmanuel Obeng begged the police not to tell his wife what he had done. But they ignored him and informed his wife all that he has attempted to do.

“Her picture and the panties were handed over to the wife,” the source told our correspondent, adding “she thanked her God and prayed that God has delivered her from evil. The lady told him point blank she will not marry him again”, a source at the police station told Connect FM.