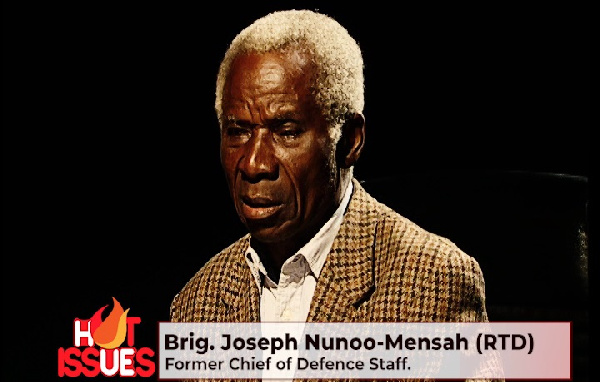 In an interview with Happy FM recently, Brigadier General Nunoo-Mensah claimed immediately President Mahama became President, he got rid of all experienced persons and replaced them with young inexperienced ones, leading eventually to his failure.

“President Mills may he rest in peace, as a politician you must come to power with a certain mindset, Nkrumah and Mills were different. Mills is like a pastor, we sit to have a chat. Mills never failed because he had people with brains around him but Mahama came and he pushed them all away and brought the young ones, kids don’t play football,” he claimed.

He promptly denied that his comment had anything to do with being booted out as soon as President Mahama assumed the reins of government: “Never, I’m never embittered because I have been sacked several times but I’m never bitterer because I put Ghana first. I have to be concern about how the country is being ruled,” he claimed.

The ex-soldier lost his role as Security Advisor when President Mahama ascended to power as an elected President in 2013.

Brigadier Nunoo-Mensah known for being outspoken has been a member of the National Democratic Congress (ND) since its inception. He was part of the coup that overthrew Dr Hilla Limann’s government in 1981.