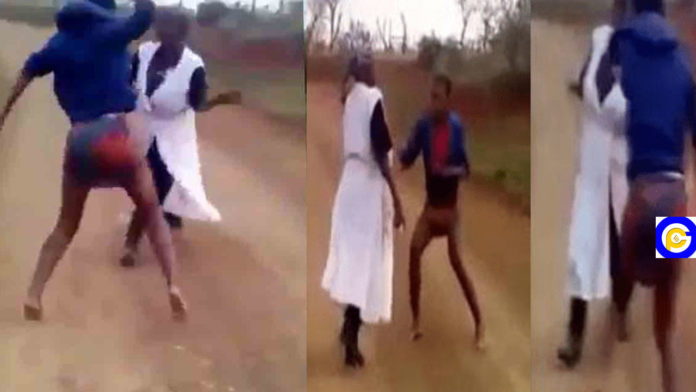 A lady has been captured in a video, mercilessly flogging her own mother who gave birth to her, because she has been told by a pastor that the mother was a witch.

BestNewsGH.com sighted the video on social media, in which a twitter user who shared it explained that the lady in question was called out during the Sunday Church service by the pastor, during ministration, and told her mother was the cause of all her problems.

BestNewsGH.com is told the Pastor firmed up his revelation which has to do with the lady’s failed relationships and struggles, with the fact that her mother was the witch that was working against her in the kingdom of darkness.

Armed with this deadly information, the frustrated lady, right from church went straight to her mother’s place and forcefully dragged her unto the streets and gave her a very severe beating, while her friends recorded the act in a video.

This website is reliably informed that the police have taken over the matter and are on the heels of the culprit who is said to have gone into hiding.