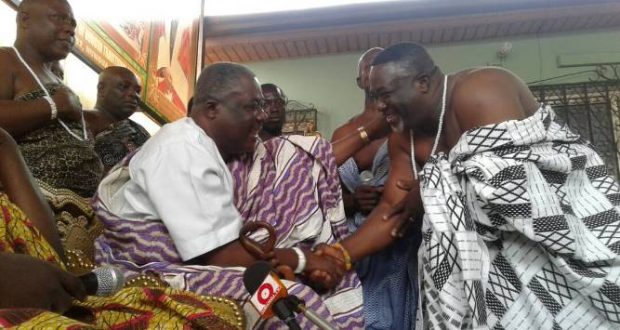 The Member of Parliament for the Kpone Katamanso Constituency in the Greater Accra Region, Nii Laryea Afotey Agbo has been inducted into the Nungua Traditional Council as the regent of Katamanso.

Nii Laryea was installed as regent of Katamanso earlier this year when the elders of the Katamanso stool picked him as a care taker chief to steer the affairs of the area due to the ill health of the current chief Nii Otu Akwetey.

Nii Laryea successfully went through all the necessary customary rites to enable him act legally on behalf of the ailing chief.

The legislator who is the third son of the ailing chief Nii Akwetey is to lead the people as well as take over the day to day administration of the Katamanso area.

Nii Laryea who swore an oath of allegiance to the Paramount Chief of Nungua, King Dr Noble Nii Odaifio Welentsi and elders of the council, said he would use his office to ensure that the people of Katamanso get nothing but the best.

At a well-attended induction ceremony at the Nungua Traditional Council, the regent of Katamanso swore to abide by the rules and regulations of the council.

He urged the regent to be fair in all his dealings and rulings as a traditional leader.

“As you step in the shoes of your father as a regent of Katamanso, you must ensure you continue to rule your people in truth and honesty at all times just as your father and great grandfathers had done in the past” he advised.

King Welentsi urged the regent to protect the interest of his subjects and the territorial boundaries of Katamanso and the entire Katamanso lands from encroachers.

The regent, Nii Laryea Afotey Agbo also noted that he will at all times serve the interest of the people of Katamanso and the entire Nungua stool.

“Having been a parliamentarian for about thirteen years and with the experience gained over the years, I shall ensure I bring to bear, all that I have acquired to the benefit of my people” he noted

He promised to seek counsel from his stool heads at both the Traditional and Divisional level and would at all times work closely with his elders at Katamanso to ensure peace and development in the area.