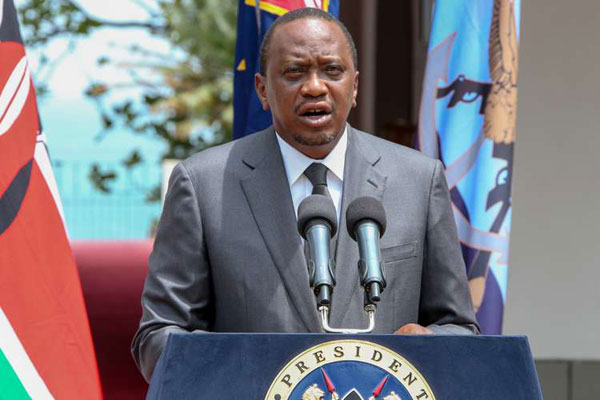 President Uhuru Kenyatta has said that Kenya will not be pressured to legalise same-sex marriages as a condition to receive donor funding.

Speaking in Nandi County on Sunday, President Uhuru Kenyatta said Kenya needs to be more self-reliant so as to avoid being pressured into passing non-biblical laws for the sake of funding.

According to Uhuru, we would rather stay poor than allow same-sex marriages,

“We must ensure that our development is what we want and not that brought from outside. We should not be told that if we want money, we must legislate that a man can marry another,” Uhuru said in Swahili.

He then posed; “Is there anything of the sort in the Bible? Wouldn’t we rather stay poor?”

Uhuru further noted that although people were a little angry with him, it was important to pay taxes so that Kenya is not forced to pass laws they do not believe in.

“This is why I have insisted, even though people are slightly angry at me, let us pay taxes. This is your money that we can use for our development and this is why I am also insisting that we must protect this money from wastage,” Uhuru said.

This is not the first time that the President has dismissed gay rights as a non-issue for Kenya. During his interview at CNN with Christine Amanpour earlier this year, Uhuru said in the Kenyan culture, homosexuality is not considered a human right.

In July 2015, Uhuru firmly told then US President Barrack Obama that Kenya is not ready to embrace homosexuality.

“I want to be very clear, I will not engage in any subject that is not of any major importance to the people and the Republic of Kenya. This is not an issue of human rights, this is an issue of society. This is not acceptable, this is not agreeable,” he said.