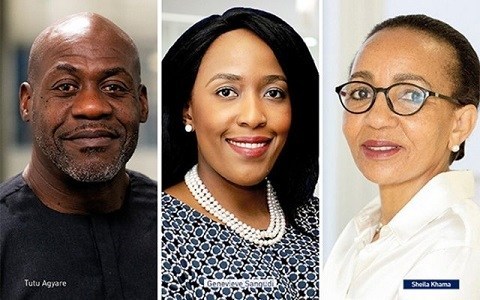 Mr Agyare joined Tullow in 2010 as a Non-Executive Director and has been a member of several Board committees, including chairing the Remuneration Committee for the past two years.

“Both Sheila and Genevieve will stand for re-election to the Board at the 2020 AGM,” a statement said.

Sheila Khama is a policy adviser on the mineral, oil and gas industries at the World Bank in Washington focusing on host government relations with commercial companies. She also represents the bank as an observer on the International Board of the EITI. Ms Khama took up her position at the World Bank in 2016 having worked in a similar role for three years at the African Development Bank. Earlier in her career, Shelia spent eight years with Anglo-American in Botswana as their Corporate Secretary before joining De Beers as their CEO in Botswana for five years until 2010. Sheila was educated in Botswana before obtaining an MBA from Edinburgh University. Upon appointment, Sheila will join the Environment, Health and Safety Committee.

Genevieve Sangudi is a Managing Director for The Carlyle Group based in South Africa. She has over 15 years of investment experience in Africa in the healthcare, financial services, oil & gas, petrochemicals, agribusiness and telecommunications sectors. Ms Sangudi joined Carlyle in 2011 and played a lead role in launching Carlyle’s maiden sub-Saharan Africa fund, including fundraising, strategy, origination and execution. Prior to joining Carlyle, Genevieve was a Partner and Managing Director with Emerging Capital Partners where she established and managed the firm’s Nigeria operations. Genevieve started her career in business development at Procter & Gamble in Boston. Genevieve received an MBA from Columbia Business School, a Masters in International Affairs from Columbia University School of International and Public Affairs and a B.A. from Macalester College. Upon appointment, Genevieve will join the Remuneration and Audit Committees.

Tullow ahead of the AGM also noted that the Board will be asking Tullow shareholders to approve the Group’s first dividend payment since 2014.

“This 2018 final dividend and our new dividend policy, which is expected to deliver at least $100 million per year to shareholders, reflect the financial and operational progress that Tullow has made over the past few years. Oil production from our West African portfolio is currently running at 95,000 bopd after a short-term production issue in the first quarter and is due to grow in the second half of the year and beyond,” the statement noted.