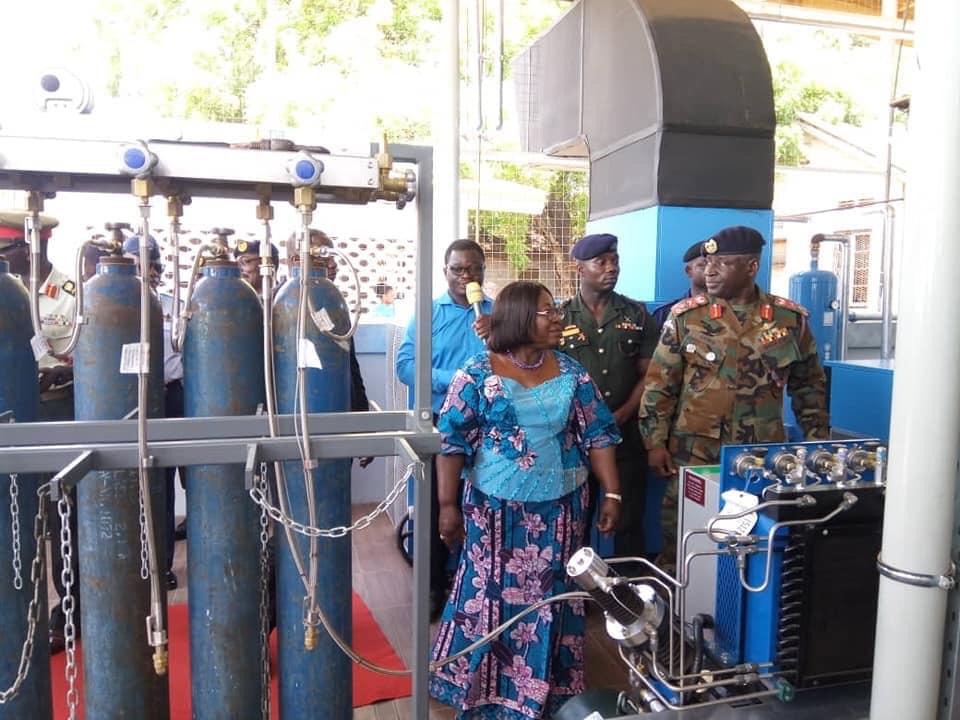 Akosua Frema Osei-Opare, the Chief of Staff, has commissioned an ultra-modern oxygen plant for the 37 Military Hospital at a ceremony in Accra.

The hospital, since 2009, has been operating a 20 normal meter cube Linde oxygen plant, which was bedeviled with frequent break downs.

The new 50 Newton-meter cube production plant, is three times the capacity of the old plant and it has the ability to dock 10 cylinders at a time, compared to the old plant, which docks only one cylinder.

Commissioning it, Madam Osei-Opare noted that oxygen was one of the critical consumables in the healthcare delivery chain the world over, adding that, the occasion marked another stride in government’s quest to achieve quality and efficient universal health care delivery.

“The importance of medical oxygen in all hospitals in Ghana cannot be overemphasized and commended the Military High Command and the 37 Military Hospital in their perseverance to get the best for their patient always,” she added.

The Chief of Staff noted that the old and obsolete plant, having served its purpose, suffered frequent breakdowns causing nerve-cracking moments for staff and patients, could no longer sustain the increase in demand.

Madam Osei-Opare said the new oxygen plant had come as “good news” to the Ambulance Service, Medical Reception Stations and all hospitals who hitherto, wait long hours and sometimes, days to get refills from the facility.

She was confident that the production plant, which met the highest standards of safety, reliability, and efficiency, would be maintained effectively by the hospital.

The Chief of Staff assured the hospital of government’s support to deal with the myriad of problems and challenges militating against the full implementation and delivery of universal health care in the hospital.

“As a sequel to this, a new multipurpose X-ray machine has been procured, installed and currently in use, whilst a new CT Scan and Fluoroscopy machine are expected to arrive soon,” She added.

Brigadier General Michael Yeboah Agyapong, Commanding Officer of the 37 Military Hospital, expressed appreciation to the government and Military High Command for supporting the hospital to secure the new oxygen plant.

Brigadier General Agyapong recalled that the old plant, which was secured during phase two of the hospital’s expansion, broke down three times a week from the beginning of 2018.

This, he noted, did not affect the operations of the hospital but the Ambulance Service and all clinics within the hospital’s vicinity that depended on their plant for a refill.

He said the hospital was in dire need of a Magnetic Resonance Imaging Machine, saying, what they have, had broken down for several years.

The Commanding Officer of the 37 Military Hospital appealed to stakeholders to help raise the facility to the desired standard as it strived to get inputs for the commencement of the third phase of the hospital project.