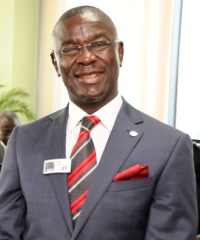 Former Chief Executive Officer of UT Bank and Prsident of UT Holdings, Prince Kofi Amoabeng has been granted bail in the sum of 110 Million Ghana Cedis.

The circuit court, presided over by Justice Essandor granted Mr. Amoabeng bail with two sureties who earn not less than 2 thousand Ghana Cedis.

BestNewsGH.com can report that among the bail conditions is the fact that Mr. Amoabeng must surrender his passport and report twice every week to the police.

The judge, explaining his decision averred that it was based on sound advocacy by Mr. Amoabeng’s lawyers.

BestNewsGH.com had earlier reported that Mr. Amoabeng was picked up from his office in Accra in the morning of today, Tuesday, January 14, 2020 and taken to circuit court 4.

The arrest is in connection with the collapse of UT Bank.