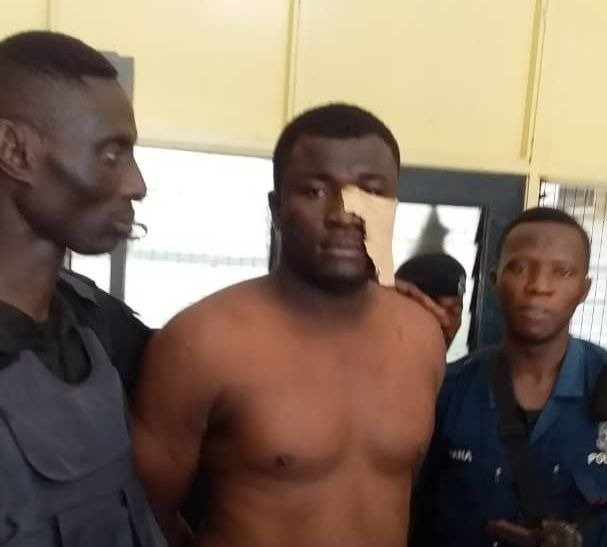 The prime suspect who is said to have killed two police officers in Gomoa Buduburam near Kasoa has been arrested.

Eric Kojo Duah, who has been declared wanted by the police was on his way to the Volta region en route Akosombo in the Eastern region when he was nabbed.

According to the information from the police, “policemen detailed on duty at Atimpoku bridge were alerted to arrest occupants of a black Golf car with registration number GW 5972-18 heading towards Volta region”.

The suspect had a big plaster on the left side of his face at the time of his arrest to disguise himself since there is a bounty of ¢10,000 on his head.

Mr Duah is said to be the masterminded behind the attack and killing of Sergeant Michael Gyamesie and Lance Corporal Awal Mohammed at Gomoa Buduburam in the Central region on Wednesday.

Sources tell Joy News the suspect and his armed gang were in an unregistered blue-black Toyota Camry from an area called Kasoa-Vodafone heading towards the Bawjiase road which is a major hideout for robbers.