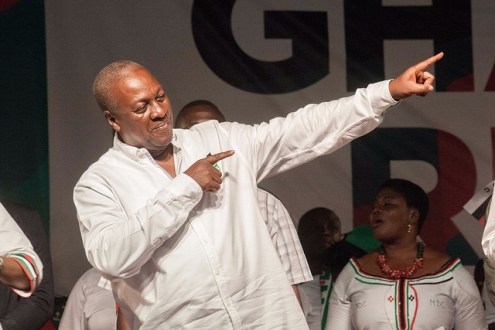 Former president John Dramanai Mahama has hit back at minister of state in charge of tertiary education, Professor Kwesi Yankah over the latter’s recent campaign commentary on the implementation of the free Senior High School policy.

Mr. Mahama whiles speaking to NDC delegates in the central region served notice to review the free SHS policy through wide stakeholder consultation if he is re-elected as president in 2020.

Mr. Mahama was reported to have said he would consult eminent educationists including Professor Kwesi Yankah who is a currently serving as a minister of state in the president Akuffo Addo government.

The education ministry in a sharp reaction, released a statement to call the bluff of Mr. Mahama saying Professor Kwesi Yankah would not accept such invitation because the call for stakeholder consultation was late on arrival and that such consultations had already taken place in the lead up to the implementation of the policy.

Professor Kwesi Yankah in that statement indicated that President Akuffo Addo government did extensive consultation prior to the rolling out of the programme and that there would be no need for another consultation.

But the Campaign team of former president John Mahama has denied Mr. Mahama extended the invitation to Professor Kwesi Yankah.

According to a statement released and signed by campaign spokesperson for the John Mahama 2020 campaign, James Agyenim Boateng Mr. Mahama rather made reference to Professor Victor Yankah of the department of theatre and film studies of university of Cape Coast who was present at the auditorium where Mr. Mahama addressed delegates.

The statement accused Professor Kwesi Yankah of “inserting his name” in the statement of Mr. Mahama by “writing a long and baseless reaction” to Mr. Mahama’s free SHS review comment.

The statement entreated Professor Kwesi Yankah to due diligence before commenting on issues of national interest.

Below is the full statement.