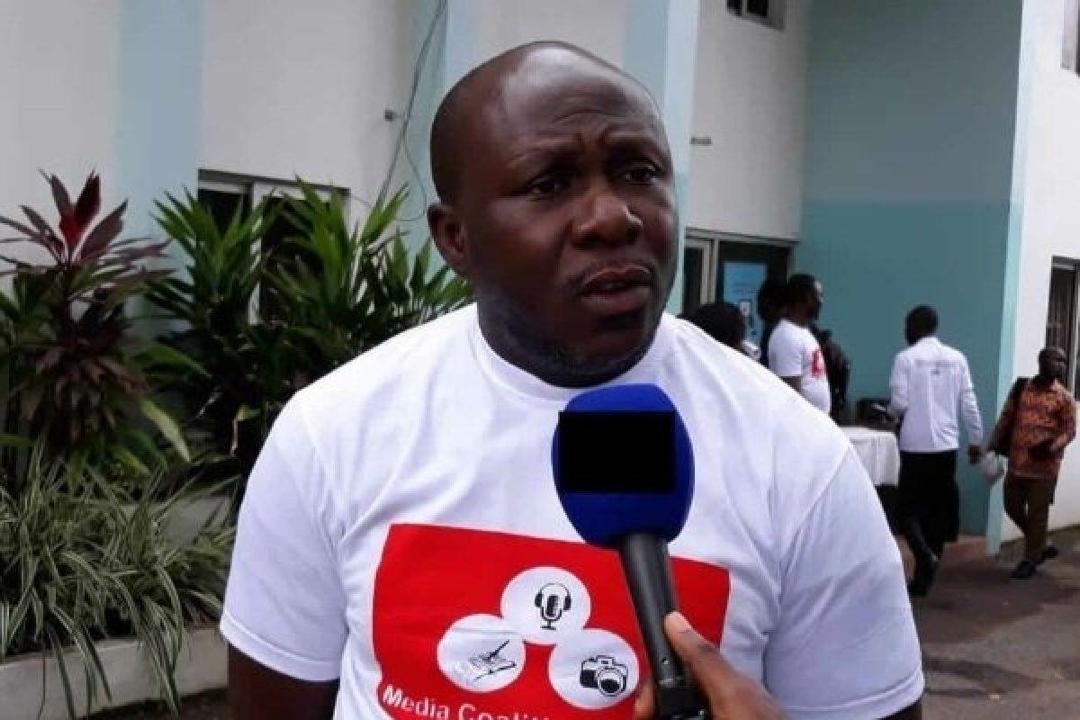 A member of the interim steering committee of the Media Coalition on the Right To Information Bill, Elvis Darko was today arrested by a joint police and military team for wielding and showing placards opposite parliament house.

The RTI team strategically chose the pavement in front of the Accra International Conference Centre because they wanted to be very visible to attract the needed attention from the legislators who have decided to frustrate the passage of the RTI law.

The military personnel seized some of their placards, destroyed them and threw them into a dustbin and as if that was not enough, Mr. Darko’s phone was seized while he was arrested and sent to the police station.

We produce below, Elvis Darko’s blow by blow account of what transpired.

We were standing on the pavement in front of the Conference Centre opposite parliament house.

I started taking pictures of those holding the messages on RTI Bill.

Then, about 3 police officers came and asked that we leave the place entirely.

We asked for their reason and one of them said it is order from above.

Another one said the road and pavement where we were standing are all part of state house and constitutes a security zone.

One of the police men called his commander to report to him.

In the midst of the exchanges, the convey of the Vice – President passed by to conference centre.

Immediately, another police personnel and a military personnel joined the exchanges.

The military personnel then forcefully took the placard from Gilbert, crossed the road to parliament gate, broke the placards with his feet and dumped it into a dust bin.

While this was happening I was on my phone ready to grant interview to Neat FM.

At this point, I cut the call from Neat FM in order to take photo of the military personnel destroying the placard.

One police man held my hand shouting that I have no right to take photo of the military personnel or the police men.

The military personnel joined the policeman to wrestle the phone from me.

They then said they have arrested me.

I told them I want to walk to the parliament police station and they rejected it.

They ordered me to join their car to the police station in parliament.

On our way, the military personnel said “when you people go to take money from people, then you come and do these things. Go and lock him up”

When we got to the police station, the military personnel drove off.

The police officer who said he is a chief inspector told those on duty why he arrested me and ordered me to sit at counter back which I did.

The statement was taken by a female police officer.

The chief inspector actually went through my photo gallery on my phone to narrate the message on the placards since I took photos of some.

I requested to make a call  and the chief inspector who arrested me said “once you are arrested you lose your rights”.

So, he refused to give me my phone.

One of the police personnel on duty asked my name, where I work and my phone number which I provided.

He then searched my me.

I had to remove everything in pocket.

After he was satisfied, he asked me  to put the items back into my pocket.

It took over 20 minutes for the commander of the station to arrive.

He invited me to his office and then explained the public order act and said we were required to inform the police about our action of standing on the pavement and displaying messages.

According to him, it was important for us to inform the police for our our safety since people with hidden motives could attack us or infiltrate our ranks and cause problem.

In the midst of the Conversation, Daniel Dadzie and Kojo Yankson arrived to find out what was happening to me.

The commander assured them that I was not arrested.

The commander requested that my phone be brought to me.

After some further interactions, I was allowed to go.

Thank you all for your support

RTI – Power To The Power (PTTP)