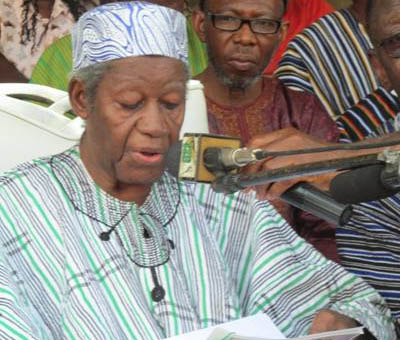 The death has been reported of the chairman of the Council of Elders of the ruling New Patriotic Party (NPP), CK Tedam at his home last night.

The 94 year old statesman has a long standing political history dating back to 1954 when he won a parliamentary seat as an independent candidate.

A founding member of the Northern People’s Party, Mr. Tedam contested and won the parliamentary seat on the ticket of the party and became the Minister for local government during the tenure of the Supreme Military Council.

Mr. Tedam is also a founding member of the ruling New Patriotic Party and served as a Member of the Council of State during president John Agyekum Kuffuor’s administration.

He eventually became the chairman of the council of elders of the NPP.

He was a Kesena by tribe from Paga in the Upper East Region.