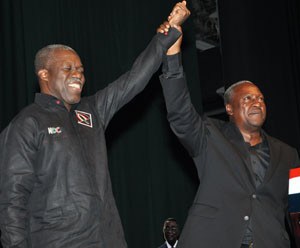 According to him, Mr. Mahama collected a whopping 150 Million Ghana Cedis from the former governor of the Bank of Ghana before naming him his running mate.

He noted that Mr. Amissah Arthur had to fall in a micro finance company to raise the amount, adding that the move weighed in heavily on the said company leading to its collapse.

He said on Accra based Oman Fm that the widow of the late Vice President, Matilda Amissah-Arthur is aware of the issue and would corroborate his claim if she is contacted.

Mr. Kwame Baffoe said the former president has been involved in several corrupt and fraudulent practices which has negatively affected the economy of the country, saying it beats his imagination the he (Mr. Mahama) is bent on returning to power.

According to him, Ghanaians should not make the mistake of bringing back Mr. Mahama as he will fleece the national coffers dry and leave Ghanaians in penury.