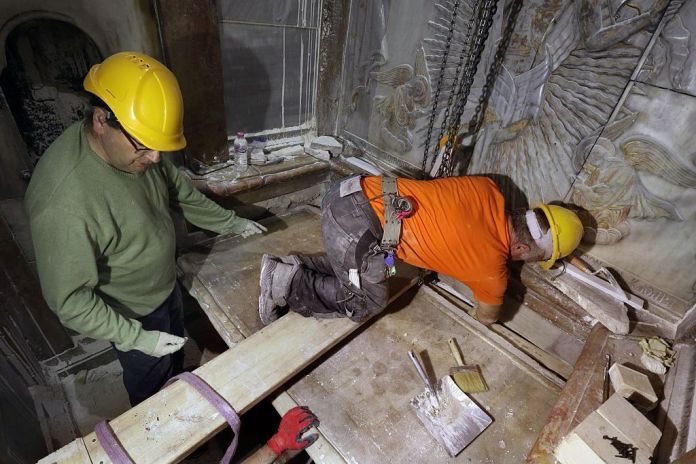 For the longest time, no one looked into the tomb, but in October 2016, a team of specialists opened the tomb.

Archaeologist Fredrik Hiebert of National Geographic partnered in the much-needed restoration project of the sacred tomb within the Church of the Holy Sepulchre, in Jerusalem. Hiebert explains, “The shrine has been destroyed many times by fire, earthquakes and invasions over the centuries. We didn’t really know if they had built it in exactly the same place every time.”

The pilgrimage site was drastically in need of restoration, and, in order to open the tomb for repairs, negotiations had begun as early as 1959. A unanimous decision had to be reached and be agreed upon by a “status quo committee” consisting of three religious leaders.

The Edicule, or “little house,” located inside the church, was built around the original bedrock believed to be the burial site of Christ, named “The Rock of Calvary.”

Hiebert said, “Everything has to be approved by the committee, so even changing a candle takes a long time. There is a ladder by the main entrance to the church that hasn’t moved in 240 years, and they still haven’t reached a decision. It’s called the immovable ladder. So the fact we were finally allowed to carry out this work is a triumph of negotiation.”

Experts eventually obtained permission from the Church to examine the tomb, as it needed to be opened in case of damage during the restoration process, and after half a millennium, the marble lid was finally lifted in the presence of Greek and Armenian Orthodox churches and the Franciscan monks.

The presence of a limestone slab or “shelf” was revealed, and it is believed to be where the body of Jesus Christ once lay.

Using ground-penetrating radar and thermographic scanners to record information, it took 35 experts 60 hours to remove the dirt, collect mortar, and document the process.

Hiebert said, “We were all getting really curious. Then we went in, looked into the tomb and saw a lot of rubble. So it wasn’t empty, even though there were no artifacts or bones.”

The team uncovered the limestone burial bed a few hours before they had to reseal the tomb.

According to The Mirror, Hiebert said, “The most amazing thing for me was when we removed the first layer of dust and found a second piece of marble. This one was gray, not creamy white like the exterior, and right in the middle of it was a beautifully inscribed cross. We had no idea that was there.”

Researchers believe the cross had been carved by 12th-century crusaders. Hiebert admitted, “When we realized what we had found my knees were shaking a little bit.”

”Often in archaeology, the eureka moment doesn’t happen in the field,” said Hiebert. “It comes when you get home and examine all the data you’ve collected. Who knows what that will tell us.”

The team then gathered the data that it needed to begin a virtual reconstruction of the tomb.

According to National Geographic, latest dating results have placed the construction of the tomb to the time of Constantine, Rome’s first Christian emperor.

Hiebert concluded, “Without bones or artifacts, we’ll never be able to say for sure this was the tomb of Christ.

“That is a matter of faith. It always has been and it probably always will be.”

A report published by the National Geographic in November 2017 revealed more information about the holy tomb.

As per the report, the scientific tests appeared to confirm that the remains of the limestone cave preserved within the church are remains of the tomb that were located by the Romans.

In addition, the mortar sampled between the limestone surface of the tomb and marble slab has been dated to AD 345. As per Pilgrim accounts, the marble cladding that covers the burial bed is said to have been installed in the year of 1555, and is believed to have been kept until the 1300s.

As per Business Insider, the historic cave is believed to be 1,700 years old after scientists analyzed the chemicals in the remains to find out how old it was. Earlier, the site was revealed to be around 1,000 years old.

In addition, the National Geographic Museum in Washington, D.C., created a 3D exhibition titled the “Tomb of Christ: The Church of the Holy Sepulchre Experience” in November 2017, which ran up until January 2018. This allowed visitors to test the ground-penetrating radar and see the laser scanners used to record and preserve the historic site. The visitors also got an opportunity to learn about the restoration project that was conducted in 2016.