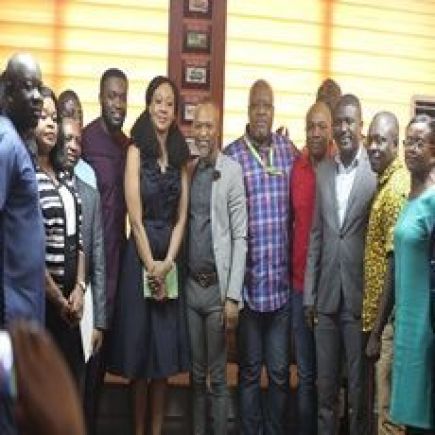 The Chairperson of the Electoral Commission (EC), Madam Jean Adukwei Mensa, Deputy Commissioner of the EC in-charge of Corporate Services, Dr. Bossman Asare; Deputy Director in-charge of Operations at the EC, Samuel Tetteh, and other leading officials, on Wednesday, visited the Despite Media Group as part of a familiarisation tour.

This is the first time such a high-powered delegation from the country’s electoral body has called upon the Abeka-Junction based media conglomerate.

The EC’s delegation was received jointly by Managing Director of the Despite Media Group, Fadda Dickson; the General Manager, Kennedy Osei Asante; Host of Peace FM’s flagship ‘Kokrokoo’ Morning Show, Kwami Sefa Kayi; and Head of Productions at UTV, Roger Quartey among others.

This is the first time such a high-powered delegation from the country’s electoral body has called upon the Abeka-Junction based media conglomerate.

The EC team arrived during the airing of Peace FM’s midday news; thus the news team took the opportunity to allow listeners interact with them on-air.

Speaking during an interview on Peace FM’s midday news, the EC Chairperson stressed that her outfit will continue to undertake and pursue the right reforms, in the areas of procurement, the Information Technology (IT) Unit, staffing and other aspects of the commission’s work, regardless of the accusations levelled against its officials.

She also disclosed plans by the commission to absorb the cost of media accreditations for election reporting.