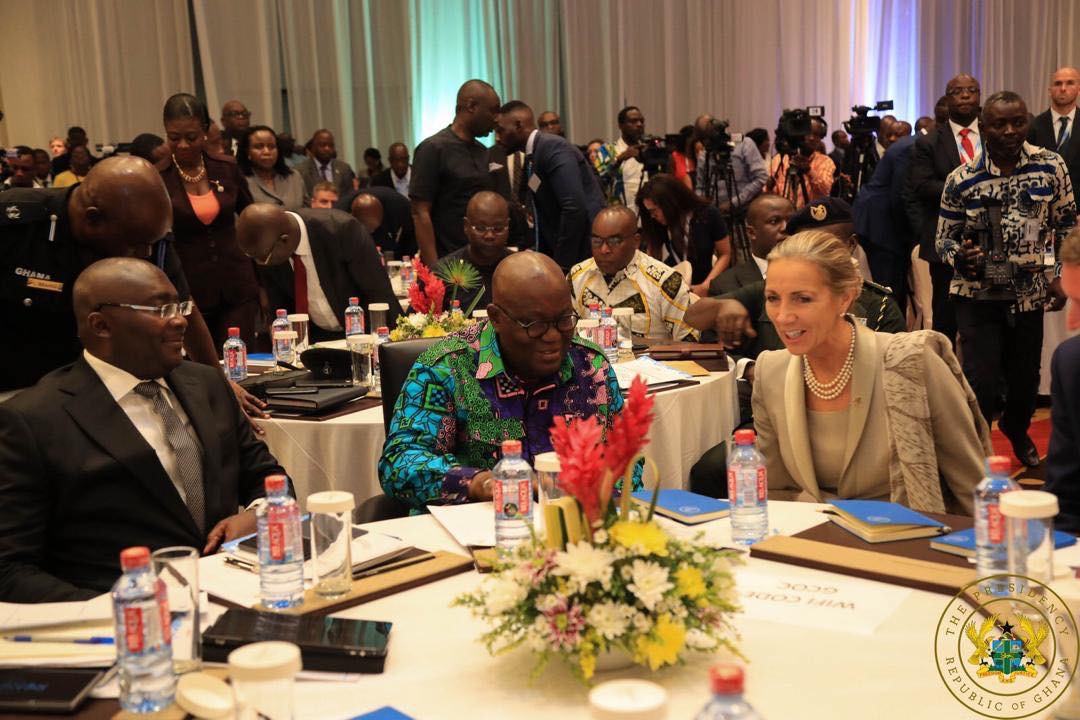 The President Nana Addo Dankwa Akufo-Addo, says Ghana is ready for business, and has urged investors from the United Kingdom, and, indeed, from around the world, to take advantage of the growing business-friendly climate in the country and invest.

According to President Akufo-Addo, since assuming the reins of office last year, his first order of business has been the implementation of economic policies to promote a business-friendly environment.

“This Government believes that growing the economy the right way, with a level playing field, is the best option for our country’s future, and that is what we are trying to do,” he said.

Delivering the keynote address at the UK-Ghana Investment Summit, on Monday, 14th October, 2018, at the Kempinski Hotel, Accra, President Akufo-Addo noted that, within 21 months, his administration has worked hard to put the Ghanaian economy back on track.

A growth rate of 8.5% in 2017, the attainment of single digit inflation, a relatively stable currency despite the challenges of a strong dollar, reduction of lending rates, and the implementation of policies such as the paperless port system, e-business registration system, and the mobile interoperability system, which are helping to formalise the Ghanaian economy, lowering the cost of doing business and cutting down excessive bureaucracy, are examples of some of the steps being taken to revive the Ghanaian economy.

In addition to these, he noted that a number of taxes, which were strangling businesses and business owners, have either been abolished or reduced.

“Utility tariffs, i.e. of electricity and water, have also seen significant reductions, with businesses and industry enjoying electricity tariff reductions of as high as 30%, and 10% reduction in water tariffs,” he stressed.

All these are being done, President Akufo-Addo said,  because “there is a government in place that believes in the primacy of the private sector, and is working to enhance the prospects of a win-win environment for both private sector and country,  an environment where companies cannot just survive, but actually thrive.”

With global car manufacturing giants, Volkswagen of Germany and Sinotruk of China, energy giants, ExxonMobil of the United States of America and Noway’s Aker Energy, as well as tech giant, Google, signaling their intentions of establishing bases in Ghana, President Akufo-Addo noted that “it is an exciting time to be in Ghana and to do business in the country.”

To the business delegation from the UK, the President recommended government’s flagship policies of “One District, One Factory”, “One Village, One Dam”, and the programme for “Planting for Food and Jobs”, to them.

He indicated also a number of projects in water, health, housing, road and rail infrastructure, transport, industry, manufacturing, agriculture, petroleum and gas, the exploitation of the country’s mineral wealth of bauxite, iron ore and gold, renewable energy and ICT growth, for which government is seeking private sector investments.

“Irrespective of where you decide to invest, Government has instituted a number of incentives for the investor, depending on the nature of the activity, or the location of the investment. This is to ensure that your investment succeeds,” he said.

Additionally, the President stated that zero percent corporate tax for ten (10) years, and, thereafter, 8 per cent for companies in the Free Zones enclave, full repatriation of dividends and profits, transfer of funds to service foreign loans and laws against arbitrary confiscation of companies or investments, are examples of some of the incentives available.

“I assure you that your investments will be safe and protected, not because I have said so, but, more importantly, because Ghana is a country governed in accordance with the rule of law, where the separation of powers, with an independent judiciary to engender accountable governance, is real,” he added.