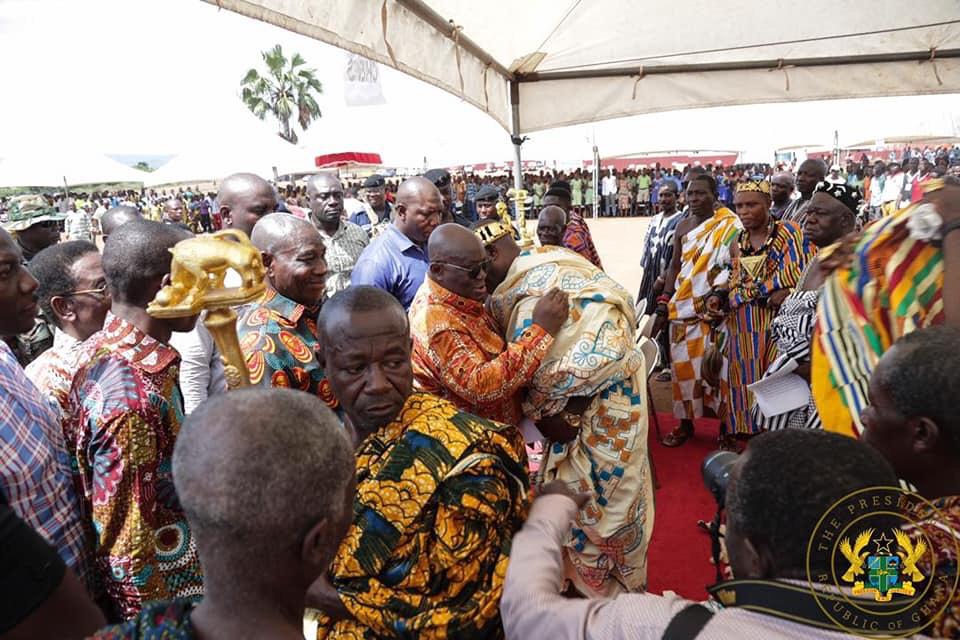 The President, Nana Addo Dankwa Akufo-Addo, has urged the people of Somanya, in the Yilo Krobo Constituency of the Eastern Region, to ignore the propaganda fed into the system by elements of the National Democratic Congress, to the effect that the University of Environment and Sustainable Development will be relocated from Somanya to Bunso.

Speaking on Thursday, 22nd November, 2018, on day 1 of his 3-day tour of the Eastern Region, President Akufo-Addo noted that the purpose of his visit to Somanya was not only to renew relations and acquaintances with the people, but also to put to death, some deliberate misinformation that has been fed into the system.

Responding to concerns raised by the Chiefs of the Traditional Area, the President stated that “there is only one University of Environment and Sustainable Development here in the Eastern Region. It is the first public University in the Eastern Region. It has only one Vice Chancellor, it has one administrative headquarters. The Vice Chancellor’s residence is going to be built here (in Somanya). The administrative headquarters is also being built here (in Somanya).”

President Akufo-Addo noted that the agreement between Ghana and the Italian Government for the establishment of the University does not allow him nor anyone else to relocate the University to Bunso, as is being propagated by the NDC, or to any part of the country, for that matter.

“I come from the area of Bunso, so it is very easy for them (NDC) to come and tell you that ‘all the things that are meant for you, he is now taking it to his hometown.’ That is not the basis on which I am governing Ghana. I am not standing only for the people of Akim Abuakwa or Bunso, but I stand for the entire nation of Ghana,” the President added.

This deliberate act of misinformation, according to President Akufo-Addo, is being peddled by the NDC because “these are people (NDC) who are looking at a long period in opposition”, explaining that the more desperate the NDC gets, the more fabrications they will put out.

“They, in their desperation to get to power, are prepared to say anything. Their purpose of coming back to power is to continue the programme of ‘Create, Loot and Share’. That programme is dead in Ghana. It will not happen again, that is not the programme the people of Ghana are looking for,” the President added.

He urged the Chiefs and people of Somanya not to be distracted by the propaganda, but rather encourage the contractors to finish the work as scheduled.

“I am hoping that by July 2019 the University will be completed, and will give me the opportunity to come to this campus to inaugurate the new University of Environment and Sustainable Development,” he added, to rapturous applause from the gathering.

Touching on the 2019 budget, President Akufo-Addo assured that every part of Ghana will witness substantial infrastructural development, which will help put the country onto the path of progress and prosperity.

“So, the characters who will come here to try and peddle sectarian, ethnocentric, backward politics, you don’t have to worry yourselves about them. They have already been rejected by the people of Ghana, and they are going to be rejected again in 2020,” he said.

President Akufo-Addo, thus, appealed for the full support of the people of Yilo Krobo, towards the realization of the vision of Government.