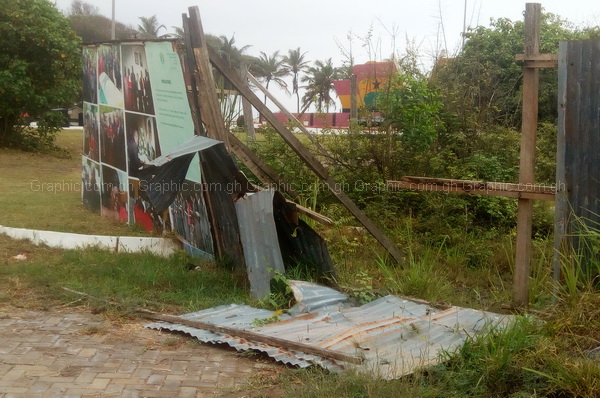 A former Deputy Chief of Staff during the erstwhile National Democratic Congress (NDC) government, Dr Valerie Sawyerr, has lashed out at the current New Patriotic Party administration over what she describes as a breakdown of law and order in the maintenance of the Asomdwee Park, where former President, John Evans Attah Mills, had been buried.

According to her, the current state of the Asomdwee Park is nothing to write home about and not a befitting resting place for the late President who died in office in July 2012.

In a post on Facebook, she exclaimed that the NDC is prepared to take over the management of the park if the Government is incapable of taking good care of the place.

Dr. Valerie Sawyerr also suggested that the Asomdwee park which is a state burial ground could be better managed under the supervision of the state agency, the department of parks and Gardens.

The department, established in 1961, is responsible for the development of the nation’s landscape and the preservation and beautification of the environment.

Currently, the Department is under the Ministry of Local Government and Rural Development.

“How much does it take to maintain the Asomdwee Park where President Atta Mills was buried? It is a state burial ground, not a private burial ground. The Department of Parks & Gardens can easily add it to their maintenance portfolio.”

“If the Government is no longer prepared to take care of Asomdwee Park, may I suggest it officially hands over maintenance of the park to the NDC Party,” Dr. Valerie Sawyerr posted.

Dr. Valerie Sawyerr also added that the burial ground should be tidied up regularly and a permanent security officer stationed at the grounds to prevent miscreants from encroaching the area and smoking on the tomb of Ghana’s late President.

“I am sure we can pay some workers to weed and tidy the place once a week. I am also sure we can find a security man to secure the place so we do not hear the rumours that wee smokers are puffing out smoke on Atta Mills tomb.”

“Why this breakdown of discipline, law and order under the watch of President Akufo-Addo please?” She queried.

There are reports that the park was no longer secure as its security had been left in a sorry state and no longer a secured place at least befitting enough for former leaders worth celebrating.

The condition of the park and the late President’s tomb is nothing to write home about as some parts of the fencing protecting it have broken down.

John Evans Fiifi Atta Mills was a Ghanaian politician and legal scholar who served as President of Ghana from 2009 to 2012.

Professor John Evans Attah Mills previously served as Vice-President from 1997 to 2001 under President Jerry Rawlings, and he stood unsuccessfully in the 2000 and 2004 presidential elections as the candidate of the National Democratic Congress (NDC).

He is the first Ghanaian head of state to die in office and was subsequently laid to rest at the Asomdwee Park.