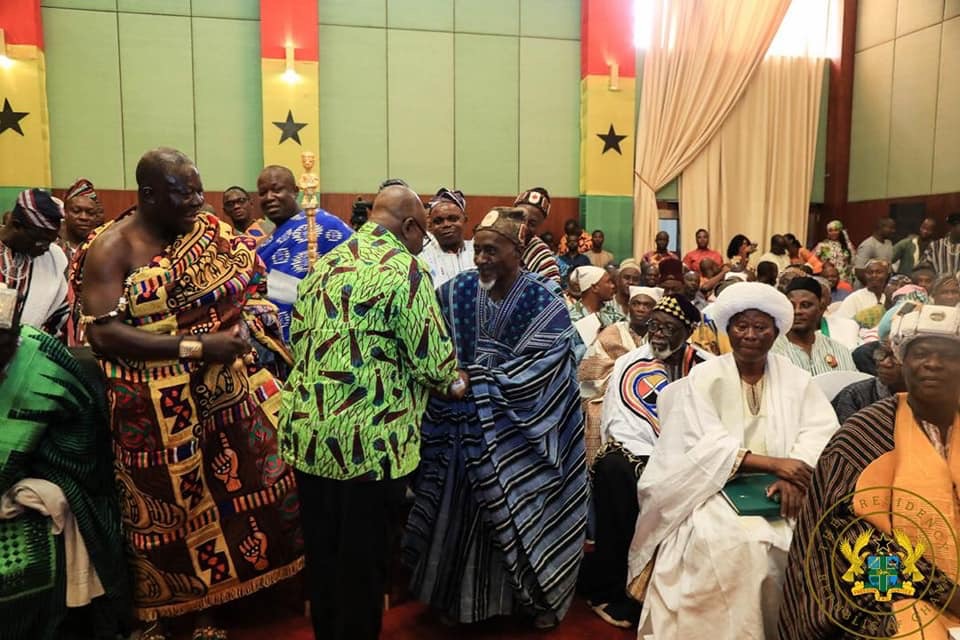 President Nana Addo Dankwa Afkufo-Addo is optimistic the Dagbon crisis would be resolved soon, to make way for the enskinment of a new Ya Naa in order to return the Dagbon State to normalcy.

He has indicated his anxiety to join the people of Dagbon celebrate the Damba Festival with a new Ya Naa siting in state.

“I did indicate, in October 2017, that I wanted to celebrate the Damba festival with the people of Dagbon, with a new Ya Naa sitting in state, before the end of 2017. Alas, that was not to be. Nonetheless, I am fully expectant that, soon, I shall be celebrating Damba with the people of Dagbon in the presence of a substantive Ya Naa’’ the president said.

The President made this known on Wednesday, 21st November, 2018, when the Chairperson of the Committee of Eminent Chiefs, the Asantehene, Otumfuo Osei Tutu II, presented the roadmap for the Dagbon peace process to him, at a brief ceremony at Jubilee House.

President Akufo-Addo noted that Dagbon, one of the most ancient traditional states of Ghana’s history, is generally recorded by historians to have been founded in the 14th century, even before the Asante Kingdom was established in the latter part of the 17th century.

The people of Dagbon, he stressed, ought, justifiably, to be proud of this heritage, and guard it jealously, adding that “an important contribution to this is to consolidate the culture of enskinning Ya-Nas without hitch, confusion or bloodshed.”

President Akufo-Addo, thus, urged the people of Dagbon to give peace a chance, adding that “it is attainable, in my view, if there is a will, and a readiness to compromise.”

He indicated that for an ethnic group with no clan cleavages, they have the best opportunity to mend fences, restore the dignity of their kingdom, and ensure the forward march of Dagbon.

“In so doing, they must learn to accommodate one another. I would appeal, from the bottom of my heart, to the Kampakuya Na and the Bolin Lana, the sons and regents of Naa Yakubu Andani and Naa Mahamadu Abdulai, respectively, young men with bright, promising futures before them, to rise above the passions that have fuelled the disputes that have marred Dagbon,” the President said.

As an expression of their love for their people, President Akufo-Addo urged the Kampakuya Na and Bolin Lana to help in the effective implementation of this road map to bring lasting peace to Dagbon, and lay the basis for its rapid development.

“The overwhelming majority of the people of Dagbon, especially the youth, are tired of this age-old conflict, and just want the opportunity to enhance their lives in normalcy and security,” he added.

The President reiterated the commitment of Government to providing the requisite financial, material, moral, physical and security resources necessary for the sustenance of the peace process that has been embarked on.

Even though Government has already spent a huge amount of money and resources in maintaining peace in Yendi these last sixteen (16) years, he assured that Government will not relent in its determination to help foster, again, peace and unity in Dagbon.

As I have said on many occasions, I am not a Dagomba, and I, therefore, cannot be an Andani or Abudu. I have no candidate for the office of Ya Na. That is a matter for the people of Dagbon. I am just an ordinary Ghanaian who wants to see the peace, progress and prosperity of all parts of our beautiful country, without any discrimination or differentiation,” President Akufo-Addo noted.