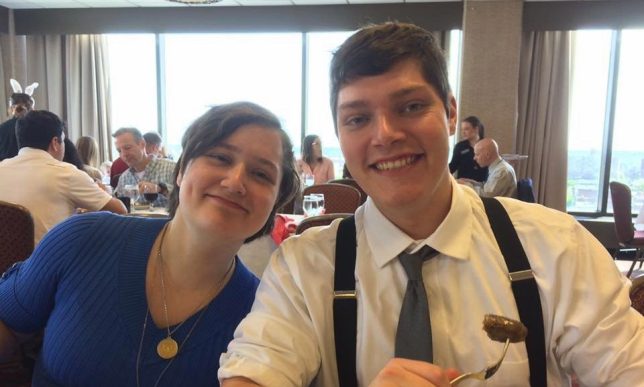 A gunman who went on a mass shooting rampage in Ohio killed his sister and her boyfriend. Connor Betts’ sister Megan was one of his nine victims in yesterday’s horrific shooting, police have confirmed. Her body was found beside her boyfriend in a car, NBC News reports. Connor, 24, and Megan, 22, are the only two children of Stephen and Moira Betts. Megan was reportedly about to start her senior year at Wright State University in Dayton. Connor was killed by police less than a minute after he started shooting a .223-caliber rifle in the streets of Dayton’s historic Oregon District.

It was the second US mass shooting in less than 24 hours. Dayton Mayor Nan Whaley said the shooter was wearing body armour and had additional high-capacity magazines. She said ‘hundreds of people could be dead today’ if police had not reacted so quickly. Whaley said at least 27 people were treated for injuries, and at least 15 of those have been released. Several more remain in serious or critical condition, hospital officials said at a news conference. Some suffered multiple gunshot wounds and others were injured as they fled. Nikita Papillon, 23, was across the street at Newcom’s Tavern when the shooting started.

She said she saw a girl she had talked to earlier lying outside a bar called Ned Peppers. ‘She had told me she liked my outfit and thought I was cute, and I told her I liked her outfit and I thought she was cute,’ Papillon said. She had been to Ned Peppers the night before, describing it as the kind of place ‘where you don’t have to worry about someone shooting up the place.’ ‘People my age, we don’t think something like this is going to happen,’ she said. ‘And when it happens, words can’t describe it.’ Tianycia Leonard, 28, was in the back, smoking, at Newcom’s. She heard ‘loud thumps’ that she initially thought was someone pounding on a dumpster. She said: ‘It was so noisy, but then you could tell it was gunshots and there was a lot of rounds.’

James Williams said he saw the shooter arrive with an ‘AR-15 rifle, wearing a vest and ear muffs’. Filming himself on Facebook shortly after the attack, he said the man ‘just started blowing bullets everywhere’, adding that he had ‘never seen anything like this before’. He later posted: ‘Just got home I’m safe I can’t even close my eyes to sleep with seeing all those poor victims. ‘Thanks you Jesus. Five minutes earlier where I was sitting on patio is where everyone was hit on side walk.’ Photographer Hannah Ray first heard gunshots while standing outside on the patio. She said: ‘[We] ran indoors only to be shoved back out because the shots were coming from inside the bar.

‘We ran for our lives and hopped a fence trampling multiple people in the process/ hid anywhere we could. I am speechless and heartbroken and bawling my eyes out. ‘I never expected to be in such a situation and have no words. This is the most terrible thing I’ve ever felt.’ A vigil for both victims and their families will be held in Dayton this evening, at 8pm local time. The shooting comes just hours after at least 20 people were shot dead in a Walmart shopping centre, in El Paso, Texas. A gunman opened fire and killed ‘multiple’ people doing their Saturday shopping at the Cielo Vista Mall, said Mayor Dee Margo. It is believed around 40 others were injured in the attack, including a four-month-old baby, CBS News reports. The gunman was named as Patrick Crusius, 21, of Allen, Texas, and he has since been taken into custody, reports CNN. He is thought to have penned an anti-immigration manifesto before launching his attack. A document was posted on a website about 90 minutes before the rampage, in which the suspect spoke of an ‘invasion’ of Latino immigrants to his country. There have been 252 mass shootings in the US this year, prompting calls for gun reform in the country.