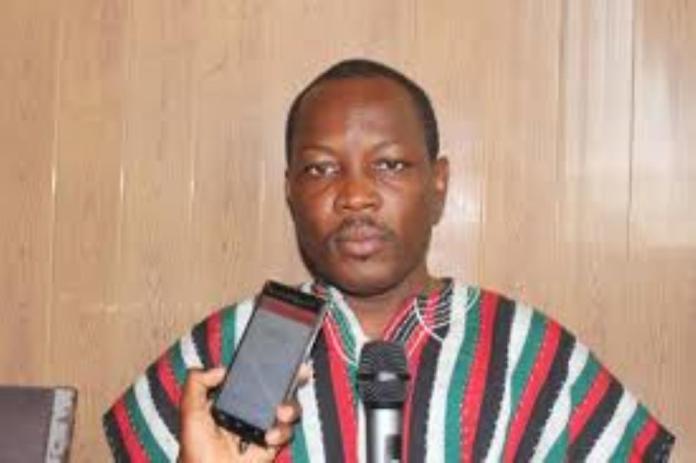 The Greater Accra Regional 1st Vice Chairman of the largest opposition National Democratic Congress (NDC), Ibrahim Jajah has found himself in serious trouble over claims of threats of death on his wife who is currently seeking for divorce from their close to three years marriage.

Information gathered alleged that the NDC politician who has exerted so much influence on the youth, have been employing thugs to snatch people’s lands in various parts of Accra, a situation which generated enmity between him and his wife, who stood against such acts.

In a petition written and signed by his wife, she claimed that Ibrahim Jajah has been issuing threats on her life after she took the decision to walk out of the marriage.

In a letter she wrote and dated April 17, 2019 to the Director General of the Criminal Investigation Department (CID) of the Ghana Police Service, she indicated that Ibrahim Jajah left their matrimonial home without informing her.

She also alleged that Ibrahim Jajah began issuing death threats on her life to the extent that he employed people who use motorbikes to be trailing her wherever she goes.

“I find these acts as terrorising and a threat to my personal security. My workers in the house have also reported on several occasions to me that they’ve cited people performing rituals around the house. I know Ibrahim very well and wouldn’t take mildly the threats he is issuing,” she stated.

In this letter, she requested for the intervention of the police as the East Legon police command continues its investigation into the matter.

However, on May 8, 2019, the lady again petitioned the President Nana Addo Dankwah Akufo-Addo to ensure her safety as citizen of the country.

She indicated that Ibrahim Jajah has been engaging himself in some illegal and dangerous activities within East Legon and it’s environs.

According to her, Ibrahim Jajah is a known land guard who appeared on several newspapers including Daily Graphic as a notorious land guard who terrorises people on their lands.

She alleged that Ibrahim Jajah has also received resistance from some of the residents associations within Accra for his “terrorism and abuse.”

She revealed that Ibrahim Jajah’s activities as result of the tacit complicity of some security personnel within the police service left many victims very helpless and homeless.

She explained in the petition that she got married to Ibrahim Jajah in 2016 but upon realizing his true nature and several abuses she suffered from him, she decided to seek for divorce.

According to his wife, there is an ongoing legal process to finalize the divorce but her security has since been under constant “ambush” from Ibrahim Jajah.

She also enumerated that Ibrahim Jajah had threatened her with death as a result of an issue she had with him regarding a land in East Legon.

She narrated that a client purchased a land at East Legon and paid 60% of the amount to Ibrahim Jajah and paid the remaining percentage to the family whom Ibrahim Jajah is purported to represent.

“The family who are owners of the land have accepted the payment and issued the client with all the necessary documentation and entitlement to the land. Ibrahim has since stormed the client’s site twice and vandalised the building on the land, demanding that the client make the remaining 40% payment to him, an amount he’s already paid to the owners of the land,” she stated.

She also narrated that the Secretary to the Okpong-We intervened in the whole saga by tendering in evidence to prove that the family had indeed regularised documents to the client for that parcel of land.

She claimed that since Ibrahim Jajah was unwilling to let go, she as the facilitator of that transaction stood by the client in ensuring that the right thing was done.

She stated that “Ibrahim Jajah then turned his guns on me for almost three months now issuing death threats and having some unidentified persons trailing me wherever I go including my home.”

His wife in the said petition also stated that “he has also threatened me before the East Legon police command that he will tear down the walls of my residence and move in by force.”

She however expressed surprise that the glaring threats on her life went without any comment from the police service.

She averred that she became sceptical about the position of the police to help in the case, hence her decision to petition the President to intervene.

“Ibrahim Jajah may be an individual, but in the scheme of things, his actions represent a security misnomer to the state. The situation is even more serious because he works with gangs of land guards in the city, whom he uses for both his land grabbing and in some cases diabolical political activities which not only harm individuals but also undermines the security of the state,” she stated.

Meanwhile all efforts to reach Ibrahim Jajah for his comments proved futile as calls sent through his mobile phone on Saturday at 20:24 am were unanswered.

Also messages sent to him on April 31, 2029received no reply from him.