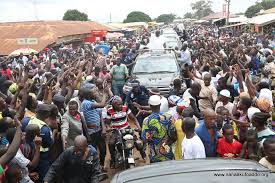 The Yendi township in the Northern Region is brimming and basking with activity as the whole of Ghana has converged there for the historic outdooring of the new Yaa Naa, Abukari Mahama.

President Nana Addo Dankwa Akufo-Addo, Ministers of state, Parliamentarians, religious leaders and traditional rulers among others are taking part in the event which will be underway any moment from now.

The Minister for Information, Kojo Oppong Nkrumah says chiefs and traditional rulers from over 40 paramountcies are attending the ceremony, including the president of the National House of Chiefs Togbe Afede, the committee of Eminent Chiefs led by the Asantehene Otumfuo Osei Tutu II and the National Peace Council and other different groups.

The Minister who moved from the Northern Regional capital of Tamale this morning to Yendi said the event is almost underway and that the president is satisfied with the progress made in Dagbon so far.