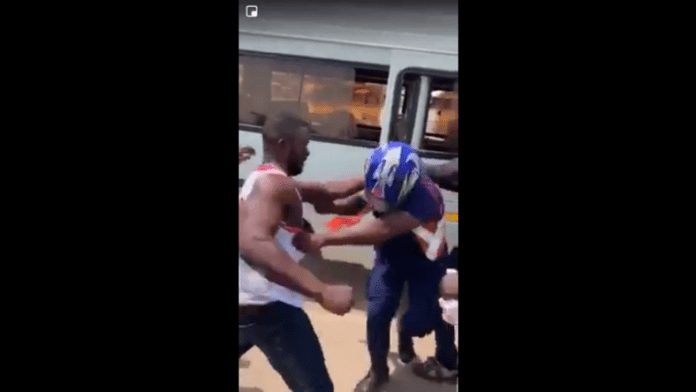 The trotro driver and his mate who were caught in a video assaulting a policeman in Weija have been arrested and are due to appear in court today, Monday March 18 2019.

The Public Relations Officer of the Greater Accra Regional Police command, DSP Effia Tenge who made the disclosure said the police are not taking the matter lightly as it borders on crass lawlessness.

She told Citi News that the police have taken a strong view against such acts of lawlessness.

Explaining the circumstances surrounding the assault of the officer, DSP Effia Tenge said the incident occurred when the driver was stopped by the officer after he disobeyed road traffic laws.

It will be recalled that the video of the free-for-all fight involving the trotro driver and his mate on one hand and the policeman on the other hand went viral on social media last week.

The policeman who a gave detailed account of what transpired explained that on Thursday March 14 2019 at Weija, the trotro driver stopped in the middle of road to wait for some passengers who were at the other side of the road.

His action caused a heavy traffic on the road and in the process, a motor bike ran into the rear of a private car. The police officer went there to help the situation. In the process the driver nearly hit him with the vehicle and sped off. He took an Okada, followed and crossed them.

He then requested that the driver turns for them to go to the station and that resulted in the attack on him by the driver and his mate.

They managed to tow the vehicle to Odorkor police station. On Friday March 15, 2019, one Warrant Officer (WO) went to the police station and claimed ownership of the vehicle but the district commander told him to go and come later.

The matter is still under investigation, while the culprits, the driver and his mate are yet to be apprehended.