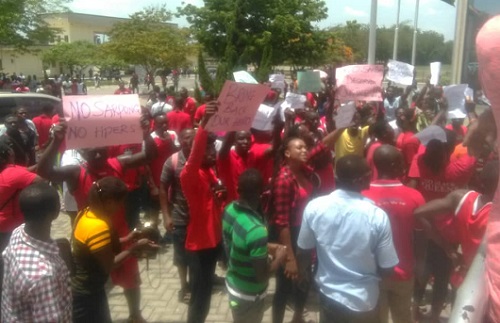 Students of the University of Education, Winneba (UEW) yesterday morning blocked some principal streets on campus with stones and tables to protest the dismissal of three principal staff.

Clad in red and bearing placards, some of which read ‘Bring back our lecturers’, the students went round campus amidst singing, registering their displeasure at the dismissals.

Academic activities came to a temporary halt as the students took over the forecourt of the administration block.

The demonstrating students called for the dismissal of the vice-chancellor, Rev Fr. Anthony Afful-Broni, accusing him of running a “one-man show”.

The students described the action by the vice-chancellor as unnecessary, and demanded its immediate reversal.

Personnel from the Ghana Police Service were deployed on the school campus to prevent the students from destroying property.

The dismissal of the three principal staff has resulted in a series of acts of dissatisfaction on the part of some staff and students, for which, if not resolved immediately, some students fear teaching and learning could come to a standstill.

Those dismissed are Professor Ephraim Avea Nsoh, former Upper East Regional Minister and Principal of the College of Languages Education at Ajumako; Dr Frimpong Kaakyire Duku, who is the local President of the University Teachers Association of Ghana (UTAG); and Dr Emmanuel Osei Sarpong, a former Alumni President who was representing the alumni on the University Council.

Excerpts from the letter of dismissal with respect to Dr Kaakyire Duku state that his conduct in respect of a court action he initiated, together with six other staff, showed that he did not exhaust the internal structures of the university for settling dispute before proceeding to court and used the institutional time to go to court without seeking official permission.

Dr Duku said he did not breach any internal regulation as mentioned in the letter of dismissal.

According to him, the university had not been fully operational since Nana Akufo-Addo took over as President of the country.

For Professor Avea Nsoh, his charge is that he has not been co-operating with other management members.

Dr Sarpong, on his part, was dismissed based on an allegation that he showed a sign of disrespect to the University Council by deciding to exclude himself from a council meeting which, he said, was about taking a decision he was not comfortable with.

The Member of Parliament (MP) for Effutu in the Central Region, Alexander Afenyo-Markin, wants Rev Fr. Afful-Broni to resign because of what he says is his inability to properly manage the university.

Less than a year after his induction, Prof Afful-Broni has been accused of victimisation, injustice and other actions that are said to have brought the image of the university into disrepute.

The Supreme Court quashed a Winneba High Court decision that led to their suspension and the subsequent dismissal of Prof Avoke.

Subsequently, lawyers of the dismissed vice-chancellor wrote to the school’s Governing Council directing it to prepare the office of their client to enable him to resume work.

Prior to this period, President Nana Addo Dankwa Akufo-Addo swore in Reverend Father Afful-Broni as the new Vice Chancellor of the University of Education, Winneba (UEW).

This was amidst a warning by law Professor Raymond Atuguba to President Nana Akufo-Addo for abetting an illegality because the induction happened pending the case challenging the removal of the immediate-past vice-chancellor.