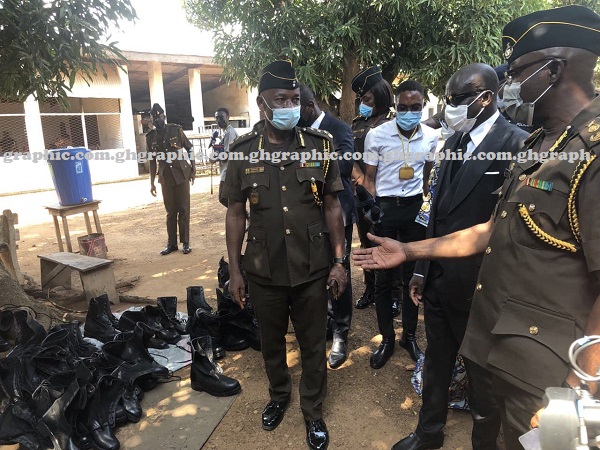 The Attorney-General (A-G) and Minister of Justice, Mr Godfred Yeboah Dame, will soon lay before Parliament two bills that will provide alternative sentencing other than imprisonment for accused persons and convicts.

The two bills are the Plea Bargaining Bill and the Alternative Sentencing Bill.

Plea bargaining is where an accused person makes some concessions, either by wholly or partly admitting his or her guilt or assisting in the investigation and prosecution of others, in exchange for the dropping of charges against the accused or receiving reduced sentences.

Alternative sentencing allows a court to sentence a convict to do community service and other options other than imprisonment.

When passed into law, the two bills are expected to reduce the backlog of criminal cases in courts, as well as help decongest the country’s overcrowded prisons.

He said the Plea Bargaining Bill would be an amendment to the Criminal and Other Offences (Procedure) Act, 1960 (Act 30), with the Alternative Sentencing Bill being a fully-fledged Act of Parliament.

“I am treating both pieces of legislation as part of my priority legislation this year,” he said.

The A-G made this known yesterday when he paid a working visit to the James Camp Prison and Senior Correctional Centre at Roman Ridge, Accra.

The visit, the first of many planned visits by the A-G to prisons in the country, was to enable him to familiarise himself with the work of the Prisons Service.

The A-G also donated some items such as drinks, cooking oil, rice and toiletries to the prison.

He was accompanied by his two deputies — Mr Alfred Tuah-Yeboah and Ms Diana Asonaba Dapaah —, the Solicitor-General, Mrs Helen Akpene Awo Ziwu; the Director of Public Prosecutions (DPP), Mrs Yvonne Atakora Obuobisa, and other top brass of the A-G’s Department.

Also present was a Deputy Minister of the Interior, Mrs Naana Eyiah Quansah.

The team was welcomed by the Director-General of the Ghana Prisons Service, Mr Isaac K. Egyir.

Mr Dame said the Plea Bargaining Law would not be wholesale, as some crimes would be exempted.

“Treason, violent offences such as rape, genocide, robbery, kidnapping, murder, attempted murder, abduction, defilement, piracy and offences related to public elections will be excluded from the plea bargaining. Apart from these offences, plea bargaining will be available in all other cases,” he said.

He said to check abuse, plea bargaining would only be done with the consent of the office of the A-G.

“It is worthy to state that in order to guard against abuses, plea bargaining will be done only with the consent of the A-G, in line with his constitutional mandate under Article 88 and will be done under strict conditions set out in the proposed bill,” he said.

Other elements of the bill, he said, included the right of an accused person to enter into plea bargaining with the prosecutor before judgment by the court, the format of the negotiations, the benefits of plea bargaining for an accused person, what the agreement should entail and the option for either party (the prosecution and the accused) to withdraw from plea negotiations.

The A-G said his outfit, despite its line of work, was very concerned about the welfare of prisoners

“Even though the mandate of the A-G, under Article 88 of the Constitution, is to prosecute crime and, by necessary implication, ensure conviction of criminals and secure imprisonment, where necessary, we have taken interest in the conditions of our prisons because the welfare of all persons in Ghana, whether in detention or not, is paramount to us,” he said.

In view of that, he said, his outfit was leading the charge to reform the country’s criminal justice system by introducing legislation and policies.

An example of such reforms, Mr Dame said, was the Justice For All Programme (JFAP), introduced by the A-G, in collaboration with other players in the criminal justice system, in 2007, which had reduced overcrowding in the country’s prisons through the setting up of special courts in prisons to adjudicate cases of remand prisoners.

Mr Egyir said the current prison population stood at 13,559, out of which 1,5753 were remand prisoners, adding that the JFAP had, since its inception in 2007, drastically reduced the remand population.

Mrs Quansah said the government was committed to ensuring that the Ghana Prisons Service received adequate support in terms of infrastructure and logistics.