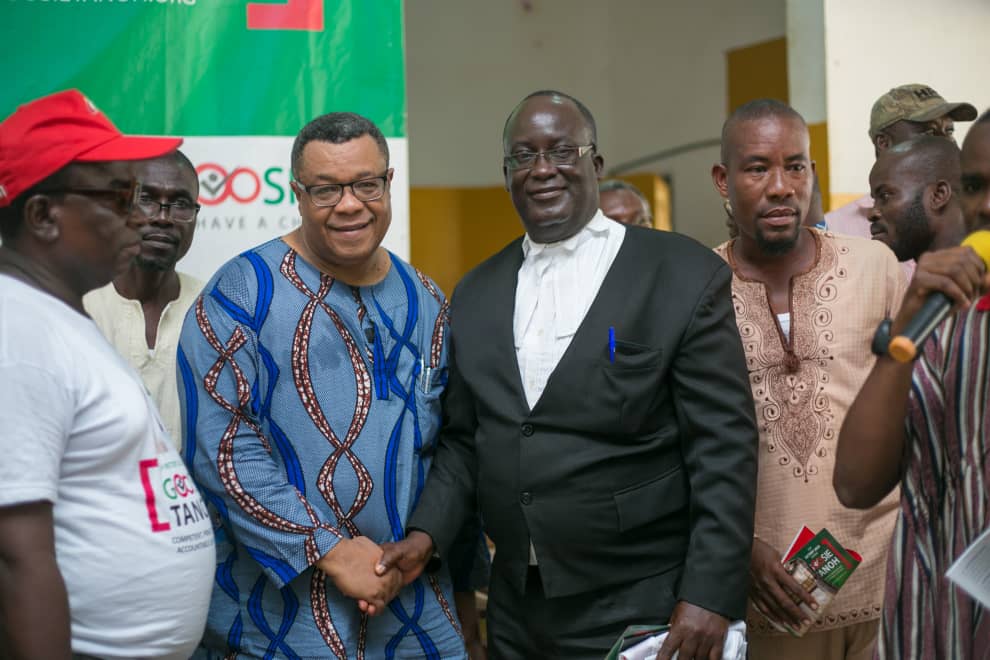 Some of the defectors who are elected polling station executives said the NDC under the leadership of Goosie Tanoh would present better alternatives to place the country on a path of real development.

‘’ I am a strong NPP member at Swedru but I love Goosie Tanoh so much so I have defected to NDC’’, Hawawu Abdullaih NPP women organizer for Pentecost old Zongo at Swedru announced.

Another supporter of NPP Zeinab Ahmed popular known in Swedru as ‘’Baby’’ indicated that she switched camp because she was touched by the message Goosie Tanoh delivered to the NDC delegates which was transmitted live on a local radio station, Golden star fm 89.3.

According to the former NPP Women Organiser for Pentecost Old Zongo at Swedru, there are over 50 of them who have jumped ship from the NPP to the NDC.

Lawyer Victor Yankson, a former NPP stalwart from Winneba who was also visiting Swedru joined Mr. Tanoh’s campaign to lend his support to the message of community empowerment and social justice.

Lawyer Victor Yankson contested the NPP parliamentary primaries election in the Effutu constituency in the year 2012 but lost to the sitting member of parliament of the area, Alexander Afenyo-Markin.

Speaking to journalists shortly after the campaign meeting between Mr. Goosie Tanoh and NDC delegates at Swedru, Lawyer Victor Yankson said President Akuffo Addo misled them with juicy promises of providing them with immediate jobs upon assumption of office of president of Ghana.

He expressed disgust at what he described as unprecedented level of impunity being perpetrated by ruling NPP government.

He said ‘’ I have defected to NDC because it appears that the NPP is ruling the country with impunity, the party is now seen as party for families and cronies. And I believe Ghana is for the ordinary people not for the elite. When such impunity takes place it makes sense that we have to go back to a party that takes care of ordinary Ghanaians and that party is the NDC’’.

Lawyer Victor Yankson endorsed the candidature of Goosie Tanoh whom he described as the man with the vision to make Ghana work again.

Other polling station executives of the NPP in Swedru who also denounced their membership of the NPP bemoaned the economic hardship in the country saying that president Akuffo-Addo and his NPP government tricked them.

They expressed confidence that NDC under Goosie Tanoh will have better policies and programs to put smiles on the faces of millions of Ghanaians.