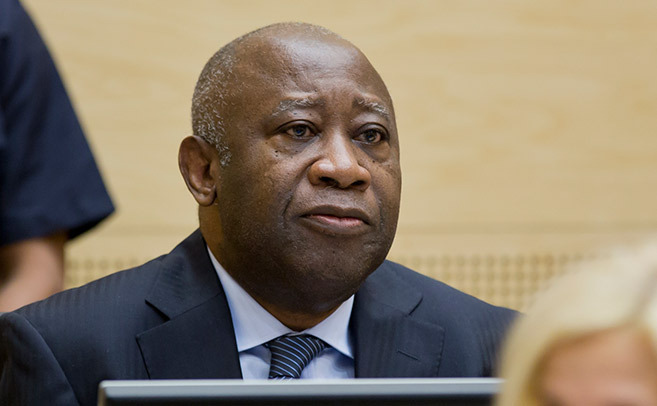 From Brussels, former president Laurent Gbagbo has taken taken up the reins of the Front Populaire Ivorien (FPI) again and dreams of the day when he can finally return home to Côte d’Ivoire. There are no hard feelings, simply a real desire for revenge.

Laurent Gbagbo doesn’t go out much, but this was different: it was his birthday. For the first time in eight years, the celebration took place outside a prison, so the former Ivorian president wanted to have some fun. But nothing flashy. On 31 May, he simply gathered some old pals, not so many of them, but those who never gave up and who continued to visit him when he was nothing.

When it comes to friendship, the hardships of life sort out the wheat from the chaff.

Surrounding him and his second wife, Nady Bamba, were Frenchmen Albert Bourgi and Guy Labertit, friends of 50 years’ standing, the Ivorian Roland Sinsin, who stayed by his side until the end in the basement of the presidential palace that was bombed on 11 April 2011, Demba Traoré, one of the vice-presidents of the FPI, Narcisse Kuyo Téa, his former head of cabinet, and the French-Ivorian lawyer Habiba Touré. For his 74th birthday, they had lunch together in a chic brasserie in the suburbs of Brussels, where they often go. Then the little gang went up Waterloo Hill. The weather was fine and mild that Friday.

There are 226 steps to climb and, little by little, the vast battlefield appears. You can picture the scene in 1815, the thousands of French soldiers facing the Anglo-Dutch and Prussian troops. The merciless confrontation, ending in Napoleon’s defeat.

The former Ivorian president knows that at the very top he will find a lion, which has stood there for nearly two centuries. The stone animal has its mouth open, its head turned towards France: it roars its victory. Laurent Gbagbo is a historian, he knows this by heart. And, on 31 May, the old lion is a bit like him.

In half a century of fighting, this political animal has experienced setbacks and twists and turns, but this time revenge is sweet.

Accused of crimes against humanity since the 2011 post-electoral crisis, the former president, who claims to be the victim of a conspiracy by former colonisers, was acquitted by the International Criminal Court (ICC) last January.

“This victory gives him a big boost,” says one of his family members. “He’s in great shape.”

“There is no sign of what he has experienced in recent years. He’s the Gbagbo I’ve always known,” says Professor Albert Bourgi.

Since his release, Laurent Gbagbo has been as silent as he is invisible on the public stage. The only comments come from his relatives.

In an age of social networks and over-communication, even his close friends do not take pictures with him, for fear of leaks. “It’s his Mafia side!” one of them joked. With this long-time oppositionist, used to being in hiding, everything is locked down. “He’s being sensible: the case before the ICC is not settled. Besides, he doesn’t need that to make everyone think about him,” explains one of his advisers. “His relationship with the Ivorians is implicit,” adds Albert Bourgi.

But this absence leaves room for speculation.

Does the former president have anything to hide? How is he? “He has the aches and pains of a man his age and the scars of a tormented life,” confided a member of his family, “but nothing serious. He has all his intellectual acumen and lucidity.”

Having remained close to his personal doctor, the Ivorian Christophe Blé, Gbagbo is now being treated by Belgian practitioners.

What was he thinking, on the evening of 5 February, behind the windows of the ICC sedan discreetly leaving The Hague to take him to Brussels? Was he looking forward to his reunion, as a free man, with his wife and their son, David Al Raïs? Was he remembering his arrival at Scheveningen prison in November 2011, sick and cold?

The seven months of incarceration in Korhogo, in northern Côte d’Ivoire, have left their marks. “They exhausted me,” he recently told a visitor.

Perhaps he was thinking about the evenings of the last seven years, which he spent alone, reading and writing in his 9m² cell. Or was he smiling as he thought of all those who predicted he would be found guilty? Many swore that he would not come out of his cell alive….

He never talks about these trials, even to his closest relatives. Gbagbo is a modest man. “There is no triumphalism, resentment or thirst for revenge in him,” claims Assoa Adou, secretary general of the FPI.

He never talks about his opponents, particularly his great rival, Alassane Ouattara, the current president. “We don’t talk about that. Laurent talks about African politics, about world events, because that’s what interests him. He lives in the present, not in the past,” says Bourgi. When he is not reading (his great passion), he spends hours in front of the TV, watching historical documentaries, epics and newsletters.

Since his release, requests for visits have been increasing, but he often declines. “He was tired when he got out of prison. The last two weeks [between the announcement of his acquittal and his conditional release] have been particularly trying,” says one family member. “And then his schedule is tight! In the morning, all the slots are taken: he is still in bed,” he smiles.

In the early days, he mainly received his friends and family. Michel, his eldest son, in charge of sending news to relatives in Côte d’Ivoire, has already come several times. Gbagbo’s first wife, Jacqueline Chamois, also came by, and the twins he had with Simone Gbagbo, Marie-Laurence and Marie-Patrice.

But politics quickly caught up with him.

The FPI’s whole strategy revolves around him”

The death of Aboudramane Sangaré, the party’s interim boss, at the end of 2018, forced him to get involved directly; his release has made him more than ever president of the FPI. “It’s much simpler, you can call him whenever you want, see him without asking for permission,” says one party member. There are no restrictions on his visits.

He is not surrounded by ICC representatives and enjoys no protection. “He didn’t even think to ask for it,” says one of his advisers.

“The FPI’s whole strategy revolves around him,” says Assoa, his closest contact in the party, who now makes frequent trips between Brussels and Abidjan. In the office of the vast house where Gbagbo lives with Nady Bamba and their son, he regularly receives his close guard.

With presidential elections scheduled for 2020, it’s a crucial time. The party is torn and weakened; they have to put things in order.

Gbagbo had hoped to meet with Pascal Affi N’Guessan to bring back the supporters of the other wing of the FPI, but the attempt was finally aborted. “He gives us his instructions. Together, we reflect on the party’s strategy. Discussions with the PDCI [Parti Démocratique de Côte d’Ivoire] are entirely under his leadership,” says one of the FPI’s vice-presidents.

After Henri Konan Bédié broke his alliance with Ouattara, Gbagbo decided to enter into a relationship with him. He received a delegation led by Maurice Kakou Guikahué, then mandated Assoa Adou to visit the former president, who is known as the “Sphinx of Daoukro”.

The visit was symbolic, but no pact is about to be sealed. “Too early,” according to members of the FPI secretariat. “They are using each other, but Gbagbo has not forgotten who Bédié was. If they pose together on a picture, it’ll just be to sting Ouattara!”

No doubt he would return

For the presidential election, only one thing is settled: the FPI will participate. “Gbagbo has decided. This time we will go to the elections,” says one of his right-hand men. Could the former head of state be the candidate? He did not answer this question. “I don’t even dare ask him directly,” confides one of Gbagbo’s close advisers. “Anyone who says he knows what Gbagbo will do is lying.”

Gbagbo knows his supporters are dreaming of his return. They have felt orphaned since his fall, and the party has not recovered. No dauphins have emerged since N’Guessan’s “betrayal”. If he wants to save the FPI, Gbagbo may not have a choice. But does he still have the strength?

If he wants to save the FPI, Gbagbo may not have a choice. But does he still have the strength?

For the time being, the conditions set by the ICC save him from having to decide. Though he has been acquitted, he is not allowed to leave the Brussels region. A “semi-freedom” that could last months or even years. “He still has so much hope and has never doubted that one day he will return to Côte d’Ivoire.

Having lost everything, Laurent Gbagbo saw his acquittal as a resurrection,” says a member of his family. The old lion, who also knew the prisons of the Houphouët-Boigny era, is convinced he has a destiny.

“When your name is Laurent Gbagbo, you don’t retire,” says Assoa Adou. Politics is your life – and you die in battle.”