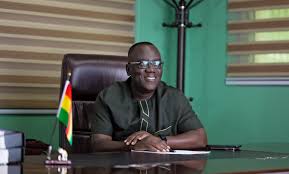 The Chief Executive Officer of the Forestry Commission, Mr. Kwadwo Owusu Afriyie has lampooned the opposition National Democratic Congress (NDC) Member of Parliament for Builsa South Constituency, Clement Apaak, for what he says is the MP’s hypocritical approach the fight against the harvesting and export of rosewood timber in the country.

According to Sir John as the Forestry Commission Boss is popularly known, Mr. Apaak’s supposed rosewood fight is a hoax and a deceptive one that is only meant to throw dust in the eyes of the public.

Speaking on Accra based Peace Fm and monitored by BestNewsGH.com, Mr. Owusu Afriyie averred that the practice of harvesting and exporting rosewood was rife and rampant under the erstwhile NDC administration of which Mr. Apaak was an appointee.

‘’There was an unprecedented export of huge volumes of rosewood between 2011 and 2015 and this trend continued until 2016. Fortunately the New Patriotic Party (NPP) came into office and we have worked tirelessly to halt the practice and the figures are there for all to see’’ Sir John opined.

He continued that ‘’it beats my imagination that Clement Apaak will conveniently and selectively choose to narrow his figures to the era of the NPP and leave out the era of the NDC when the practice was at an all-time-high.’’

He said for Mr. Apaak to have kept a blind eye to the practice and all of a sudden begin to be critical during the current administration, smacks of a man who is only out to politicize the fight and campaign against the harvesting and export of rosewood timber.

According to him, there is no record anywhere to show that Mr. Apaak ever sought to fight or campaign against the harvesting and export of rosewood timber in the country between 2011 and 2016 when they were in government and the practice was high.

‘’There is no iota of truth in the figures he is throwing out there in the public domain. If there are any at all, evidence abound that the trend is actually dipping and so these figures are merely being manufactured by Clement Apaak for political gain. The reality is on the ground and that is to say the practice has seen a drastic reduction under this government.’’ He added.

Sir John said it is about time the Builsa South MP stops his fake rosewood campaign and also stop throwing dust in the eyes of the general public with manufactured and concocted lies.

He added that government attaches a lot seriousness to the fight against the practice, hence the ban on the harvesting and export of rosewood, adding that anyone caught in the practice would be dealt with strictly in accordance with the relevant statutes.