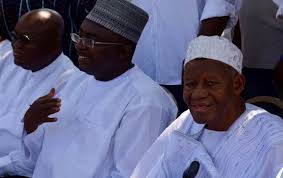 According to Dr. Bawumia, the late Mr. Tedam served Ghana and the NPP with dedication, dignity and zeal.

‘’Samira Bawumia and I condole with his family, the New Patriotic Party and Ghana at large for the demise of  this great man’’ the vice president said in statement.

I have received with sadness the death of our father and  venerable statesman Mr.Clement Kubindiwor Tedam affectionately called  C.K Tedam.

He epitomised honesty, loyalty, humility, wisdom and was a source of inspiration to me and anyone who was privileged to know him.

He served Ghana and the New Patriotic Party with dedication, dignity, and zeal.

Mr. Tedam served as a Member of Parliament during the colonial era and was a founding member of the Northern People’s Party. He was appointed the Minister of Local Government under Supreme Military Council junta.

With the return to democracy in 1992, Mr Tedam became a founding father of the New Patriotic Party and later a member of the Council of State under former President John Agyekum Kufuor.

Until his demise, he was the Chairman of the NPP’s  Council of elders.

Samira Bawumia and I condole with his family, the New Patriotic Party and Ghana at large for the demise of  this great man.

This is a life to be celebrated.

May his gentle soul rest in perfect peace.