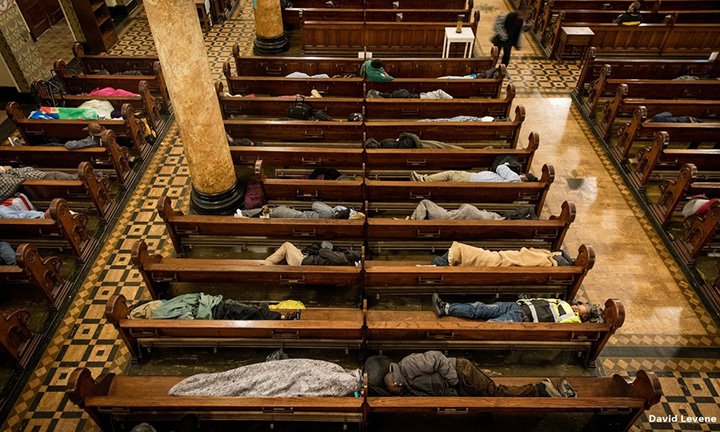 Nearly 15 years ago, St. Boniface church in San Francisco began opening their doors for homeless people in need of shelter. The effort was started by Father Louis Vitale of the church, and community activist Shelly Roder, in 2004 and is known as The Gubbio Project.

Hundreds of people each day pass through the church, using the pews to sleep on, and getting blankets from the staff.

“No questions are asked when our guests walk into the churches; in an effort to remove all barriers to entry, there are no sign-in sheets or intake forms. No one is ever turned away; all are welcomed, respected and treated with dignity,” according to the Gubbio Project’s

The facility is still open for local churchgoers who want to visit throughout the day, but 2/3 of the church is reserved for the Gubbio project.

“This sends a powerful message to our unhoused neighbors – they are in essence part of the community, not to be kicked out when those with homes come in to worship. It also sends a message to those attending mass – the community includes the tired, the poor, those with mental health issues and those who are wet, cold and dirty,” a representative with Gubbio said.

One of the main complaints that people often have about homeless shelters is that they can feel like prisons, and be extremely dangerous as well, but the Gubbio project seems different. 95% of those surveyed said they always or usually feel safe at The Gubbio Project, and those who pass through are not treated like prisoners as they are in many shelters.

Last year The Mind Unleashed reported that the city of Seattle was planning to set up razor-wire fencing to keep homeless populations from camping. Then, not long after we reported that San Francisco was using Robots scare homeless people away from encampments and report them to police. Also in San Francisco, we recently reported that the city spent $8,700 installing large boulders under overpasses to prevent homeless people from setting up camps. There were numerous homeless encampments in the area until they were recently forced out of the area, and now the City’s government is doing everything they can to keep the camps out of the area.

“It means they are criminalizing homelessness. They’ve created 4 laws against the homeless. No camping, no sleeping in cars, no panhandling and no feeding the homeless,” Mark Lane told RT.