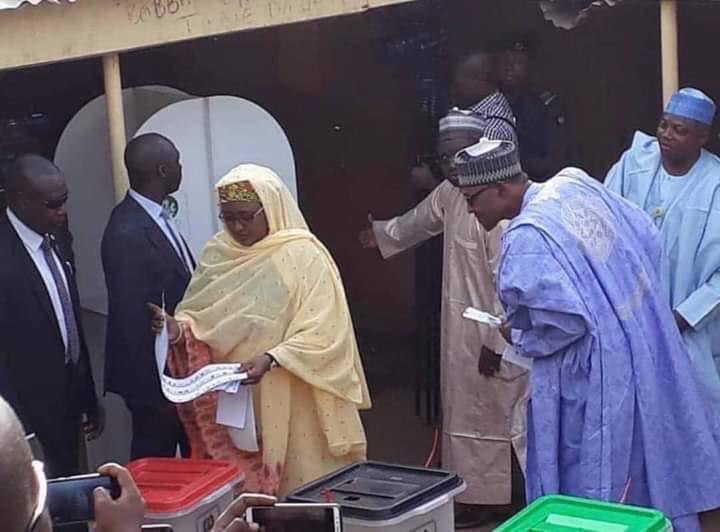 A viral photo has shown Nigerian president Muhamadu Buhari ostensibly checking to see who his wife voted for in the ongoing presidential polls.

Mrs Buhari got cleared to vote before her husband but Mr. Buhari was seen looking at her ballot before he proceeded into the booth to cast his ballot.

The wife of the president looks to have allowed him so to do with the entire episode drawing laughter among the people present at the booth.

Buhari is seeking a second and final term to govern Africa’s most populous nation. He stressed being very hopeful indeed after casting his ballot.

Speaking to reporters after casting his ballot in his hometown Daura in the northwestern Katsina State, the president responded to whether or not he will handover if defeated: “I will congratulate myself, I’m going to be the winner. Thank you very much.”

But it is not the first time such an incident has popped up with aspirants. In 2016, a similar incident happened in the United States between then candidate Trump and his wife Melania Trump.

Trump beat his main contender Hillary Clinton to emerge president and to takeover from the first black American president Barack Obama who had served as president for two terms – 2008 – 2016.

Buhari is one of a handful African leaders to have met with the US president when he visited Washington in official capacity and met Trump at the White House.