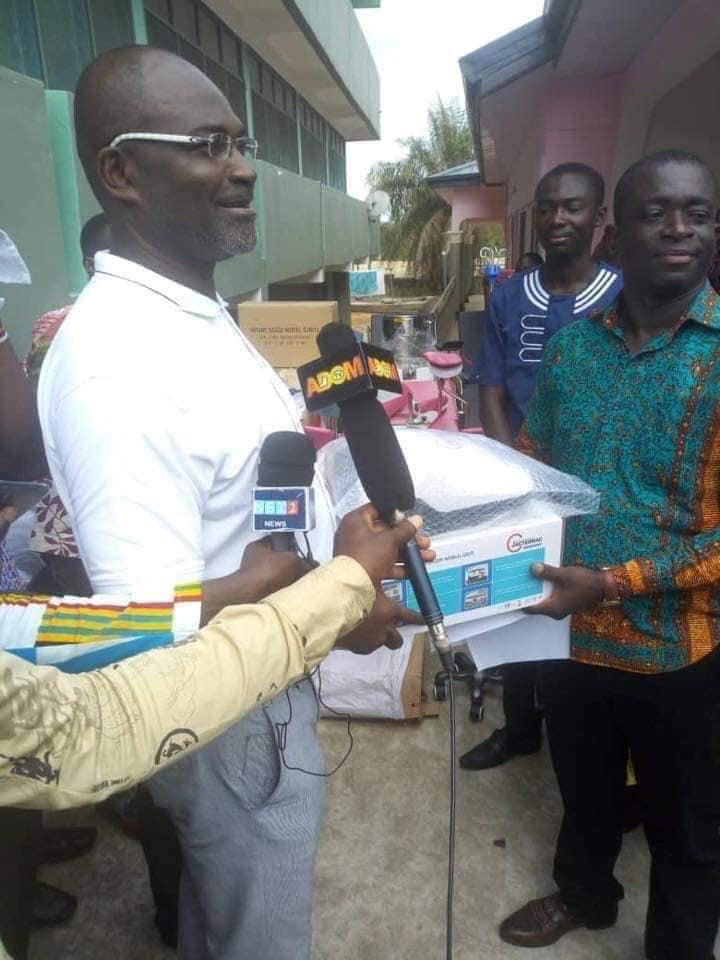 The Member of Parliament for the Assin Central constituency in the Central Region, Kennedy Ohene Agyapong has donated medical equipment to Assin Foso Polyclinic to help boost health care delivery.

The items include microscope autoclave machines, Blood Bank refrigerator, 10 set of beds and chairs as well as refrigerators, baby Scale machines and other Theater equipment.

He also added two Motorcycles for easy movement to nearby communities.

The politician and businessman further promised to buy a 40kv generator, air conditioners, an incubator and other theater equipment to the Directorate.

Handing over the items to the Municipal Health Directorate, the outspoken parliamentarian said the donation formed part of a health support scheme under his jurisdiction to demonstrate his commitment to better health care delivery to the people living in Assin Central Municipality.

Mr. Ken Agyapong said aligned to this, the Assin Foso Nursing Training School will open in September this year where some of the committed nurses and doctors will get the opportunity to teach for extra income.

He also promised to provide a brand-new pick-up vehicle to the Directorate to boost its operations by the end of the year.

Mr. Agyapong commended the staff and officials of the directorate for their unflinching commitment to good health care delivery in the area and urged them to sustain it.

He encouraged the staff to relate well with the community members in the course of their work to help promote development.

Mr Asumadu, the Municipal Health Director, also praised the MP for the support, which had come at an opportune time to meet the needs of the health directorate and people in the area.

He pledged their commitment to good and quality service delivery from the health directorate as well as the staff and called on all stakeholders to support the course of health care delivery in the Municipality.

In a related development, the Municipal Director’s Bungalow, which had been renovated under the auspices of the MCE was officially handed over to the directorate.