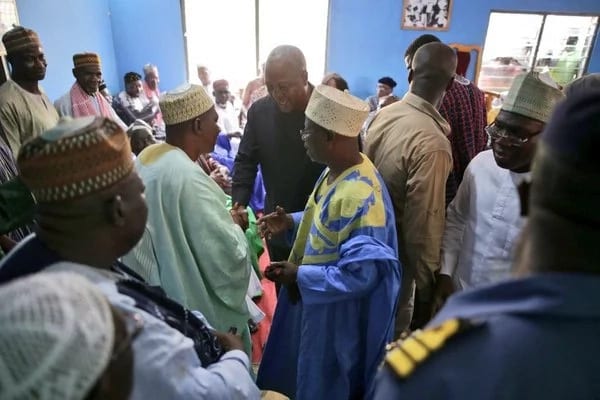 The tour by Vice President Dr. Mahamudu Bawumia to Muslim communities across the country seems to have dazed the opposition National Democratic Congress (NDC) and its presidential candidate for the 2020 elections, John Dramani Mahama.

This is because the  former President for the first time organized an iftaar for NDC Muslims at his office today, May 31, 2019.

He has never done that while he was in office and even after he left office.

The move has been described by political analysts as a direct response to the tour which is being embarked upon by the vice president across the country in which he joins Muslims in their respective mosques to pray and break the fast together.

Deep throat sources at the office of the NDC Flagbearer said the entire party has been shaken to the core, following the massive reception and positive vibes the vice president’s tour is generating.

The sources say the former president and the leadership of the NDC are having sleepless nights that Dr. Bawumia is hitting all the positive major headlines in the zongo communities ahead of the 2020 elections.

The vice president’s tour to Muslim communities across the country has generated a lot of commendations from the various leaders in these communities most of who eulogise the Nana Addo Dankwa Akufo-Addo led government for taking the development of the zongos to another level.

Just yesterday Thursday, May 30 3019, the Ya Na, Abukari Mahama II was emphatic when he told the vice president that “This is the first time in the history of the Gbewaa palace that a Vice-President of the Republic had participated in an Iftaar and said prayers at the palace.”

This was after the Dr Bawumia took part in the Iftar and performed Magrib prayers with the Dagbon overlord.

Apart from hitting the positive headlines with the tour, the vice president seems to have a deep message for the people wherever he goes, with peace, unity and religious tolerance being the key subject of his submissions.

Earlier in the week, President Akufo-Addo and the first lady joined Vice-President Bawumia and the second lady Mrs Samira Bawumia as well as the Chief of Staff, Mrs Akosua Frema Osei Opare to have iftaar with the National Chief Imam and other senior Muslim clerics.

President Akufo-Addo opined during the session that “What we are witnessing here is a reaffirmation of what our country is about. We have a country with two major religions living side by side. The peaceful coexistence has been our legacy through the ages and in our time we should do everything to promote it”.

He said the Jubilee House, the seat of government was occupied by Christians and Muslims and that it was appropriate ‘’we have the opportunity to break the fast together’’ in a sacred month such as Ramadan.

President Akufo-Addo also cited Dr Bawumia’s tour across the country during which he has been praying with fellow Muslims, adding that it gave impetus for same to be replicated at the seat of government.