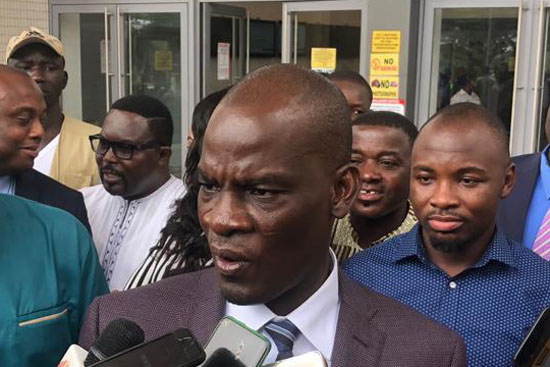 The Minority Leader in Parliament, Mr Haruna Iddrisu has indicated that the opposition National Democratic Congress (NDC) would challenge the ruling of the Accra High Court on Tuesday that said the Member of Parliament (MP) for Bawku Central, Mahama Ayariga, was obliged by law to stand trial in a criminal case filed against him by the Special Prosecutor.

According to Mr Iddrisu, they would soon be heading to the Supreme Court for an interpretation, reports Graphic Online’s Emmanuel Ebo Hawkson, who was in court on Tuesday.

Mr Iddrisu, together with a host of Parliamentarians from the opposition NDC were in court on Tuesday in solidarity with Ayariga who is in court on charges of fraudulently evading tax on imported vehicles.

Ayariga had earlier argued that he was not going to be able to honour the court summons by the Office of the Special Prosecutor because Parliament will be sitting on that day.

Mr Ayariga in a letter addressed to the Special Prosecutor (SP), Mr Martin Amidu and dated Sunday, June 2, said he can’t honour the Tuesday, June 4 summons and can only be present in court on any other day that does not coincide with Parliamentary sittings.

He further warned that any conduct by the SP which impedes or obstructs his right to Parliament on that day will amount to Contempt of Parliament and added that he was not enthused about abandoning his parliamentary duties to respond to what he described as an “inappropriately timed invitation”.

However, on Tuesday morning, the Accra High Court ordered that he should appear in court.

When he appeared in court on Tuesday afternoon, the court ruled that since Ayariga is an accused person and not a witness, he is not immune to stand trial.

Graphic Online’s Emmanuel Ebo Hawkson reported from the court that Justice Botwe made the ruling following a certificate filed at the court’s registry by the Speaker of Parliament asked the court to exempt Ayariga from the trial because he was attending parliamentary proceedings.

In an interview with the media after the court hearing, Mr Iddrisu argued that the judge failed to take into consideration the whole provisions of the 1992 Constitution that dealt with the legislature.

He said Mahama Ayariga was not asking to be exempted from the trial.