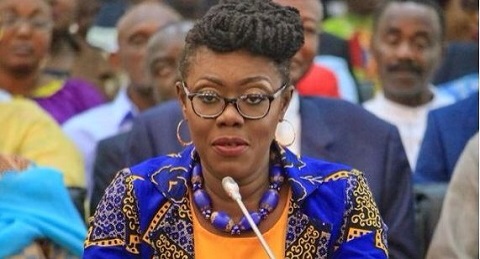 Mr. Brempong during an interview on Accra based Citi TV said the ruling NPP had made a mistake by choosing a woman to contest him, insinuating that a woman was not fit to contest the seat with him.

But speaking on Accra based okay Fm Wednesday January 30, 2019, the Minister for Communications who also doubles as the Member of Parliament for Ablekuma West Constituency said the comments by the NDC candidate was not only targeted at the NPP and its candidate in the by-election, Lydia Seyram Alhassan, but the generality of women in politics in Ghana, Africa and the world at large.

Mrs. Ursula Owusu-Ekuful said when efforts are being made globally to increase women participation in politics, it is highly unfortunate that a man who seeks the mandate to lead a constituency that has majority of its constituents as women will choose to debase and denigrate women in the manner in which Mr. Brempong did.

‘’We are absolutely disappointed at Mr. Brempong and I think he doesn’t know what time it is. Today in every part of the world, it has been recognized and agreed that we are very important stakeholders in development. Without the involvement and participation of women, the development of the various countries retrogresses because we also bring a different perspective to things’’ the Minister argued.

According to her, the NDC candidate’s comments by extension means that all the female members of parliament from both the NDC and NPP are a mistake, adding that the women in the Ayawaso West Wuogon Constituency must show their anger by massively voting for the NPP candidate.

The Ayawaso West Wuogon by-election has been occasioned by the demise of the Member of Parliament for the Constituency, Emmanuel Kyeremateng Agyarko who passed on a few weeks ago in the United States of America where he was undergoing treatment for an ailment in a health facility.

The Electoral Commission has slated the election for tomorrow, Thursday, January 31, 2019.