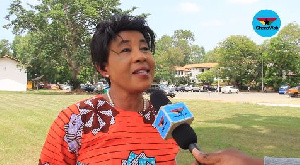 BestNewsGH.com reports him as saying ‘’just a look at the nakedness of Madam Desoso can cause erectile dysfunction.’’

Abronye DC who was speaking in an interview on Accra based Neat FM and monitored by BestNewsGH.com said the NDC National Vice Chairperson is a ‘’dangerous drug that can automatically render a man’s sexual organ dead’’.

It is unclear why the NPP Regional Chairman will attack his political opponent in this manner, even though it is believed the two may have some scores to settle with one another.